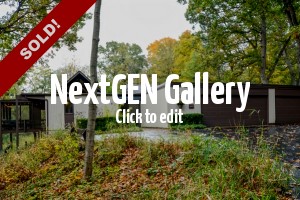 Fans of Mid-Century Modern architecture in the Chicago suburbs have almost certainly heard the name Dennis Blair before. An alumnus of Frank Lloyd Wright’s Taliesin school, he designed and built many homes in the Northwest Suburbs and North Shore, and is known for the original design of Stevenson High School.

When Kevin and Kimberly decided they wanted to live in this excellent example of Blair’s work at 249 Kimberly Rd in North Barrington, it wasn’t because Kimberly wanted to live on a street with which she shares a name.

“We weren’t initially looking for a modern home, specifically,” says Kevin. “In fact, it wasn’t even marketed as a Dennis Blair home. We only confirmed that after closing. But we’d walked through a few homes and nothing was sticking. We happened upon this Dennis Blair open house and fell in love.”

It’s easy to see why. Set high up on a hill overlooking a stream on nearly an acre of beautiful, old trees, the home perfectly takes advantage of its natural surroundings. A long peaked roof rises above the flat portions of the home, with triangular glass at either end. And the northwest-facing side of the house has a long wall of windows, filling the home with natural light.

“The home needed some work,” continues Kevin, “but the tree house feel of the large main room instantly connected us to the house.”

After purchasing the house, Kevin and Kimberly knew they wanted to change a number of things to make the home even more open and airy, and to make it more suitable for modern living.

“The kitchen was closed off and a little strange,” says Kimberly. “It even had a built-in sewing machine, which was interesting although not really useful for us in our everyday lives. But the thought of one large great room looking down through the trees to the creek, with the ability to open all the doors in nice weather was instantly there. We love being in this house every day.”

So Kevin and Kimberly proceeded to make some changes, opening up the kitchen, and therefore creating one magnificent space that goes from the front of the house to the back, with that peaked section affording views of the tall trees and brick chimney, and the wall of glass flooding the space with light. Since they were combining spaces that were previously divided into discrete rooms, they decided to unify the entire area with common flooring, opting for hand-scraped maple floors.

The beautiful new gourmet-style kitchen features a prep island and lots of counter space, and the white cabinets, with their simple flat-trim panel design, are not only respectful to the home’s original character, but keep the space nice and bright.

In addition, the wall of glass sliders originally had screens on them, but since there was already the wonderful screened-in porch with built-in seating, and a nearly 40-foot long deck that’s also screened opposite the sliders, they removed the sliding screens which opened it up that much more.

“We spend most of our time in the great room,” says Kevin, “and the way the house rolls into the outdoors so effortlessly is such a great bonus. The kids ride scooters down the porch at all times of the year, and the atrium as a media room has been unbeatable for entertaining.”

The atrium he speaks of sits between the home and the 3-car garage, and was once open to the sky above. A previous owner covered the atrium with a roof, and Kevin and Kimberly felt that it would make a great entertaining space. They replaced the original ground cover pavers with large-scale block and evened it out to be more like an indoor space. They added a home theater projection system and even trimmed out the screen area to look like it was an original part of the room, carefully designing the various elements to be harmonious with Blair’s aesthetic, as they did with many of their other remodeling tasks.

The atrium also has a peaked roof, and the peaks were originally faced with screens, but now feature poly windows in the peaks, and screens along the back side of the room, with telescoping poly windows that can be closed in inclement or cold weather. Kevin and Kimberly added a heater to the space, too, so that the room could be used and enjoyed year round.

“Unless it’s below about 20 or 25 degrees outside, we can use the atrium all year. The heater keeps the space plenty warm and it’s a great place to watch movies together as a family, or just to entertain,” explains Kevin.

From the atrium, you can get out to the back yard, which is landscaped over a couple of different levels that includes a play area for their kids. From there, you can walk around to the walkout lower level, where Kevin and Kimberly have placed a seating area around a portable fire pit. There are also paths or steps leading back up to the front of the home, or down to the area along the stream, complete with a fallen tree “bridge”.

“We go on ‘adventures’ through the yard all the time,” says Kimberly. “Between the large rope swings, hill slide, sledding down the big hill and the balance log, the kids keep their friends entertained in this adventurous yard!”

Back inside the home, Kevin and Kimberly made a number of other improvements, remodeling all three of the home’s full baths, including the private Master Bath, the hall bath shared by the other three bedrooms, and the full bathroom downstairs off of the walkout level’s large family room that has sliders out to the fire pit area. The carpeting in the home is all new since they purchased the house, and they made a number of other improvements such as new lighting in many spaces, updating mechanicals and even adding a whole house generator.

They’ve put a lot into the home in terms of modernizing it for today’s living patterns, but Kevin is being relocated out of state for work and so they must leave this home that they love so much. If you’re interested in seeing this wonderful example of Mid-Century Modern architecture, please call me at 312.907.4085 or via e-mail at lou.zucaro@bairdwarner.com

You can see the official property listing here: http://249kimberlyroad.bairdwarner.com/