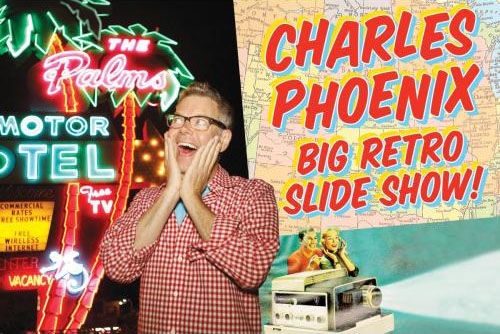 Chicago Bauhaus and Beyond and Columbia College are proud to present humorist and author Charles Phoenix for one night only, September 20th at 6pm.

Charles is an aficionado of all things Americana, especially the kitschy, pop cultural aspects of the mid-century. Charles has been seen on Conan and Martha Stewart, has been heard on NPR and has been featured in nearly countless newspaper and magazine pieces.

And now Charles Phoenix will be bringing his retro flavor of humor and his boundless appreciation for Americana to Chicago for the first time for his Big Retro Slide Show!

I spent a few minutes on the phone with Charles today to talk about what to expect at the Chicago show and more. Take a listen here (press the little triangle-shaped “Play” button to listen!)

Don’t miss the first Charles Phoenix show in Chicago…be there or be square!