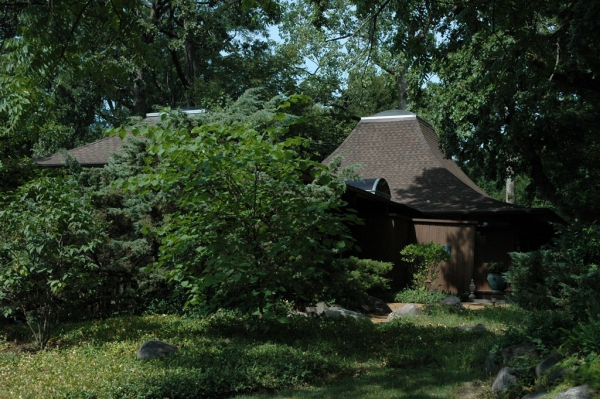 Recently I happened to meet a woman named Min, who’s the owner of an Erickson & Stevens home in Palatine. She mentioned to me that she’d be putting the house up for sale soon, and “soon” has now arrived.

Min was kind enough to let me photograph her home and property, a nice-sized piece of land in a great area. She’s made plenty of improvements, both to the home and to the yard. Keep reading to take a look at this very cool mid-’60s home by one of my favorite architectural firms.

The first thing you’ll notice is an Erickson & Stevens trademark: the “Jamaican” roof. Although most locals think of these as Asian style pagoda roofs, the design was inspired by architecture that Erickson & Stevens observed when working for a client in Jamaica. The upward-sweeping roofline was a signature element, as were the many skylights and some of the interior features that you’ll see later on.

The firm designed three similar houses for this Palatine subdivision, all of which initially had the same layout: Side-facing garage at the front with a Jamaican roof and skylight, then a half-cylinder skylight running the full width of the house that separates the garage from the rest of the residence. The kitchens had an eat-in area that could be used as a dining room or den, then there was a main living area, a central courtyard with a fountain, three bedrooms, a master bathroom and a guest bathroom. 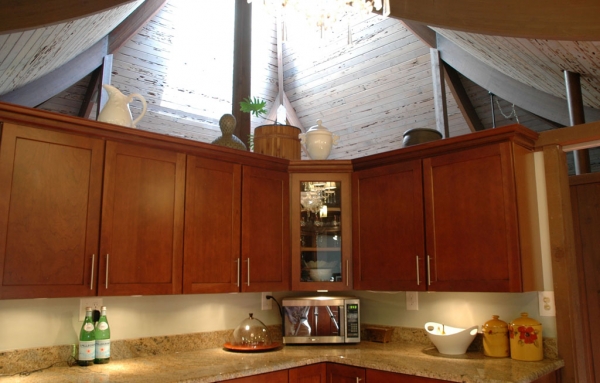 Over the main part of the house, from the far side of the foyer skylight back, was another Jamaican roof. All of the rooms in the houses, except for the bathrooms, were open to the soaring ceiling, allowing the natural light from the skylight at the top to reach all parts of the house.

The entry foyer of each home features another somewhat common Erickson & Stevens element: A cut-out in the foundation out of which a tree is growing. These cutouts were actually never poured when the foundations were laid, and the trees are growing in the very ground on which the home sits.

Each house also featured a partial basement (the area of the house from the kitchen back has a basement, while the rest is slab.

This particular house was at one time the personal residence of Dennis Stevens, Don Erickson’s business partner, and he made several modifications to it. 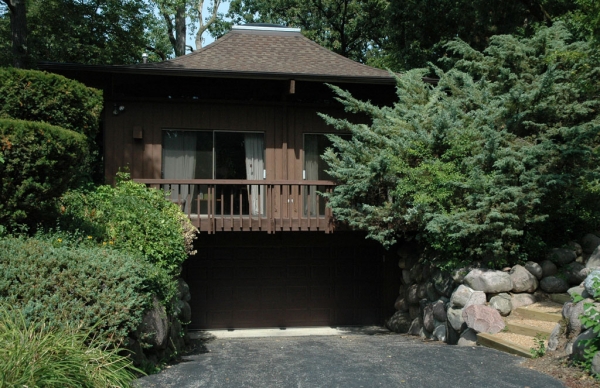 “I dug out under the original garage and made a new garage underground,” says Dennis Stevens, still working as an architect in Idaho. “Where the garage used to be, I made three new bedrooms and a bathroom, then I put a roof over them and made a playroom for the kids upstairs, with the stairs being suspended from chains.” The chains are another signature element of many Erickson & Stevens projects. 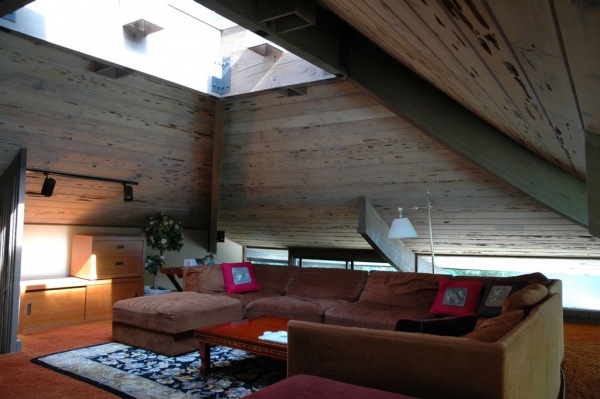 In addition to moving the garage and adding the new rooms at the front of the house, Stevens also combined the master and middle bedroom of the original house into a single, large master bedroom. 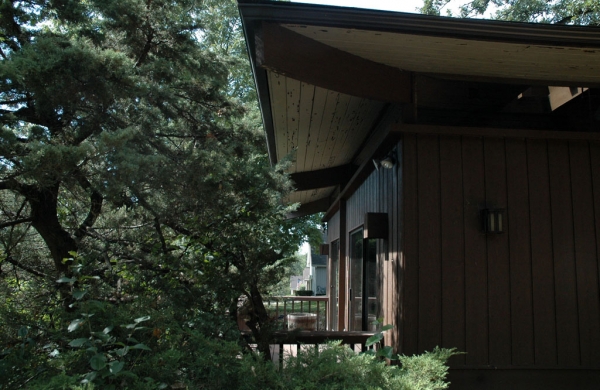 “The homes had three bedrooms originally, all of which were 13′ x 13′. There were two reasons for that,” Stevens says. “First was that when you put together a bed, nightstands and have a dresser and all that, 12 feet is a little tight. Plus, we used these 3″ x 6″ pecky incense cedar planks from an industrial mill and they came in 13-foot lengths.”

Of course, one of the most striking features of the home is that you can see up into that roofline from pretty much everywhere in the house. The pecky cedar, or wormy cedar as Don Erickson used to refer to it, has natural insulating properties.

“We just put one-and-a-half-inch fiberboard on the outside of the roofing, and put the shingles right on top. You can’t do that today,” says Stevens.

Stevens and his family lived in the house for 32 years, and two other owners occupied the house before Min bought it 7+ years ago. 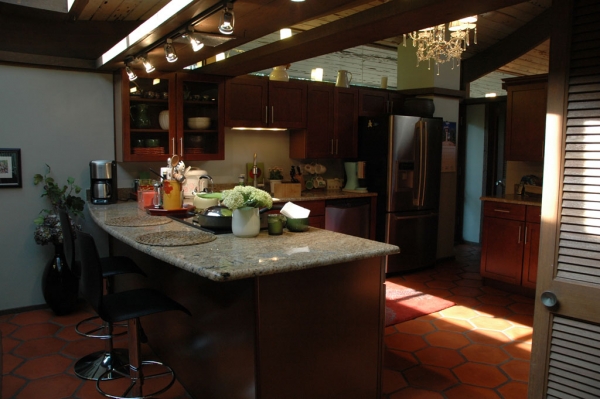 “I’ve done a lot of work to the house,” says Min. “I replaced the front door, re-did the kitchen, and I replaced all of the skylights.” 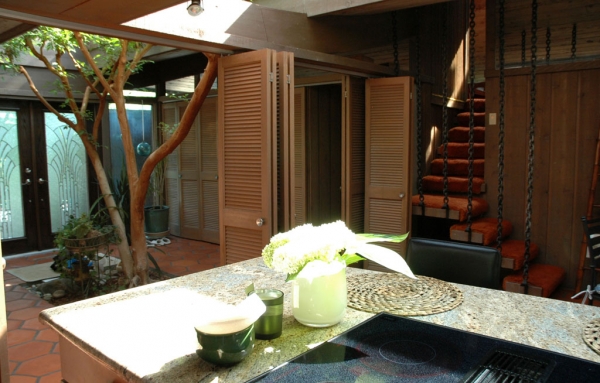 The foyer is a striking area, with its hexagonal terra cotta tiles (carried through much of the home) the ficus tree growing out of the cut-out in the foundation, and the half-cylinder skylight that runs from the front door, over the tree, and continues across to the other side of the house. 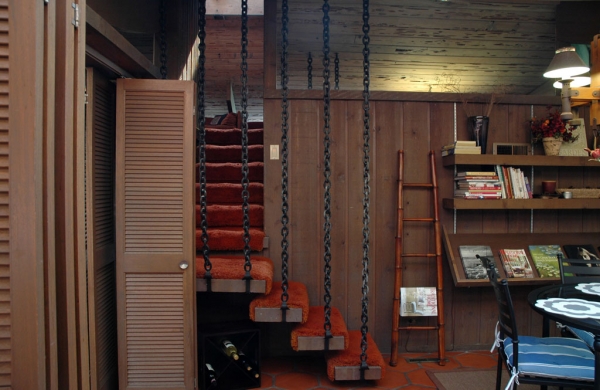 The skylights are a major feature of the house. In fact, all ceiling volumes are either topped with a skylight or are skylights. Min replaced all four of them: The two at the tops of the Jamaican roofs, and the two half-cylinder skylights in the foyer area and over the sun room.

“Over the sun room, I raised up the skylight when we replaced it. The original one was sitting right on top of the wood beams and water would sit there and some of the beams were rotting. I fixed the rotting wood parts, raised the skylight up and pitched the roof next to it so that water won’t sit there anymore. Now it drains off to one side or the other.” 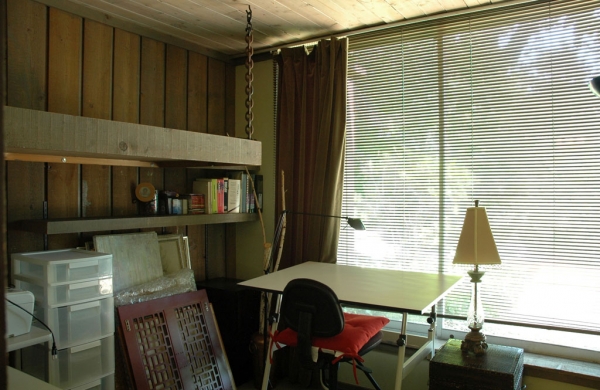 In one of the lower bedrooms that Stevens added while in the house, there were bunk beds suspended from the ceiling by chains. One of the bed platforms remains while the other had been removed some time in the last 15 years. Min, an artist, uses that room as her studio. 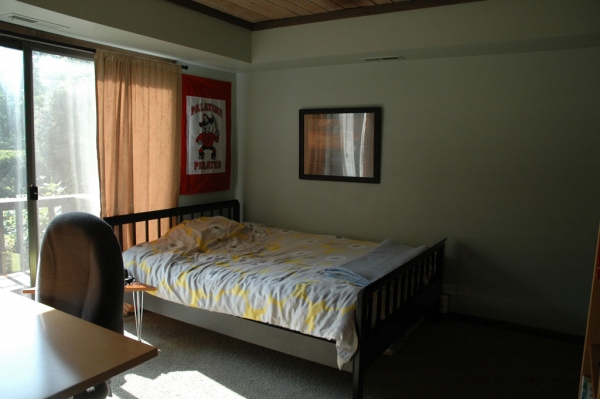 The other two front-facing bedrooms have sliders that open up to a balcony over the underground, tandem, 3-car garage (two cars go side by side with a third further back behind the car on the left). 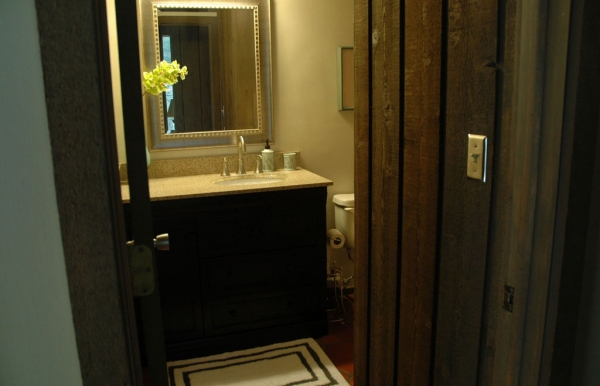 Min also remodeled the lower bathroom and the guest bathroom in the main part of the house. 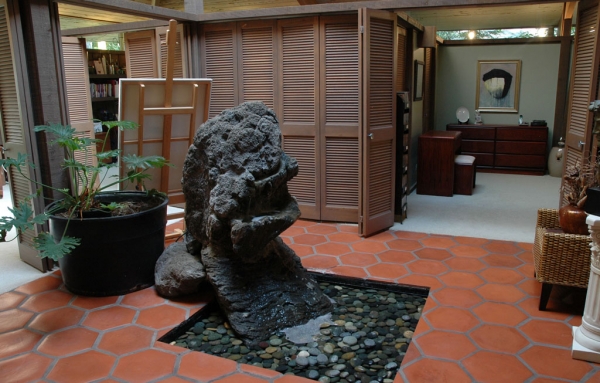 The central courtyard area is unique not only because of the fountain (each of the three houses has a different fountain design), but because of the louvered, bi-fold doors that can be opened and closed to rearrange the flow of the spaces. 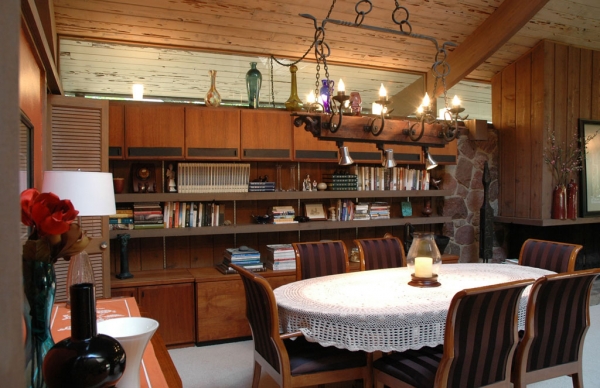 The dining room area features an original light fixture (with some more lights added later) and cabinets that were there when Min bought the home. 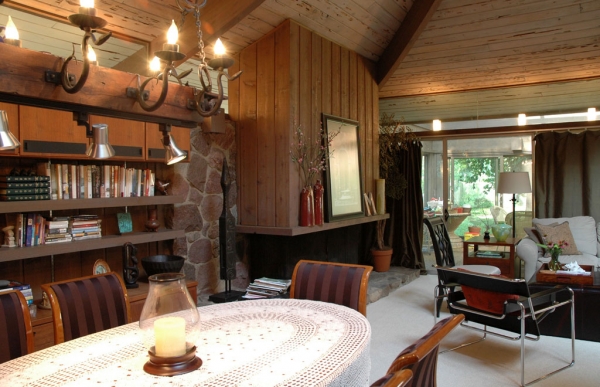 The fireplace has a supsended look to it, and has a really great natural stone hearth and side-surround, while the main chimney facing is cedar. 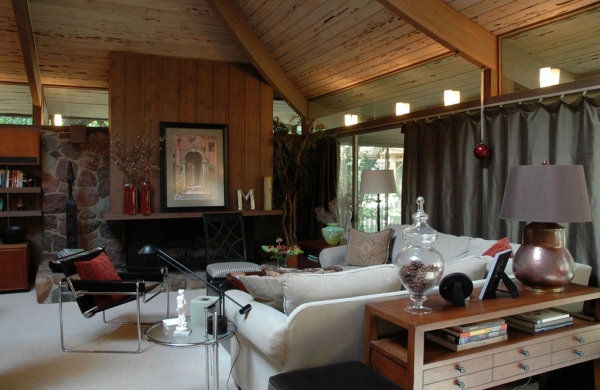 Almost the entire perimeter of the house is wrapped in clerestory windows that let in even more natural light, while benefiting from the large overhangs at the bottom of the roof line. The lights along the clerestory sills give off a warm glow up into the ceiling volumes at night, but aren’t really needed during the day for the most part. 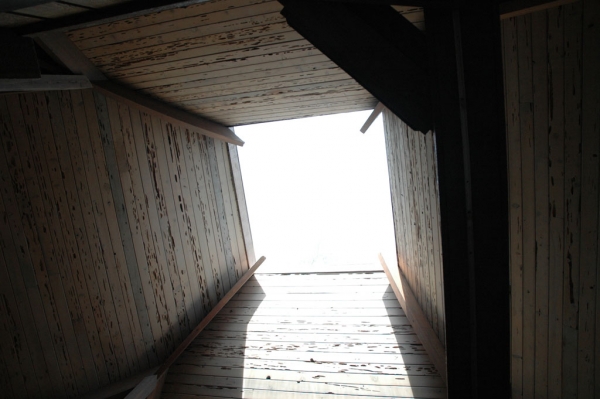 “There’s so much natural light in here that I almost never turn on the lights,” says Min, “It’s really nice.” 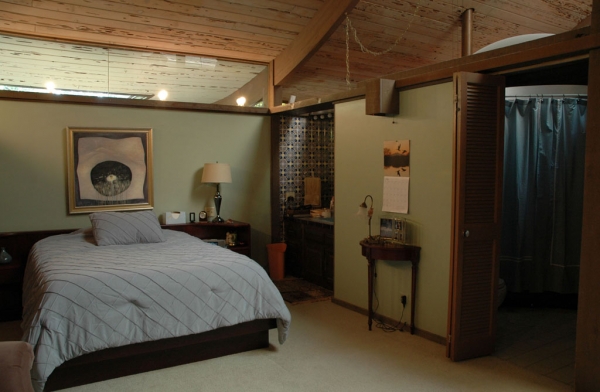 In the master bedroom, the original bathroom has a unique layout, with the vanity area facing into the bedroom, and a separate tub/shower/toilet room. The shower is a corner tub with a domed skylight over it that gives the bathroom some privacy while still letting in natural light from above.

The carpeting in the main part of the house has been replaced recently, and you can see another common Erickson & Stevens feature, the cedar light boxes around the perimeter of some rooms, that just cover a bulb in a socket, but give off warm up/down lighting. 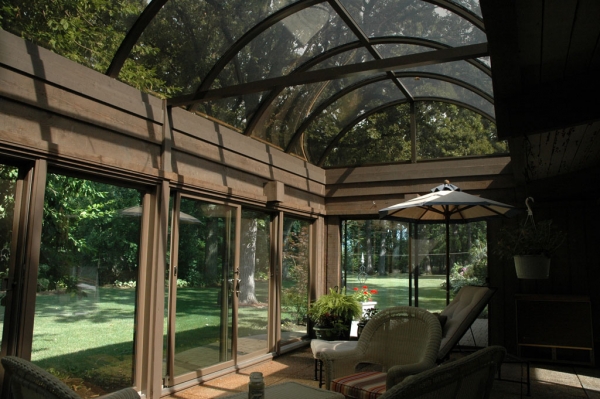 The sun room at the back of the house is a real treat year-round, where you can sit in comfort while you soak in the nature all around you, including above, thanks to the massive skylight that makes up the roof of the space. 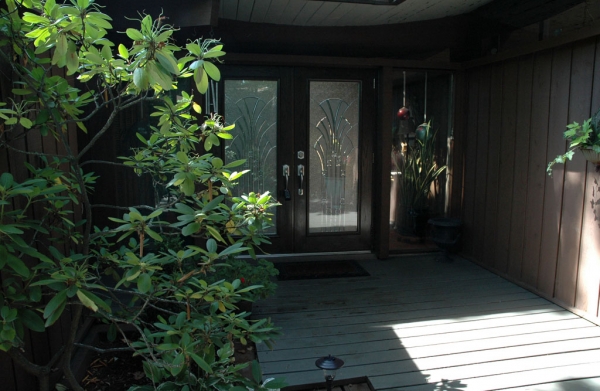 Outside, Min has done even more work, adding a lot of really lush, beautiful landscaping to the property, much of which has an Asian flavor to it. 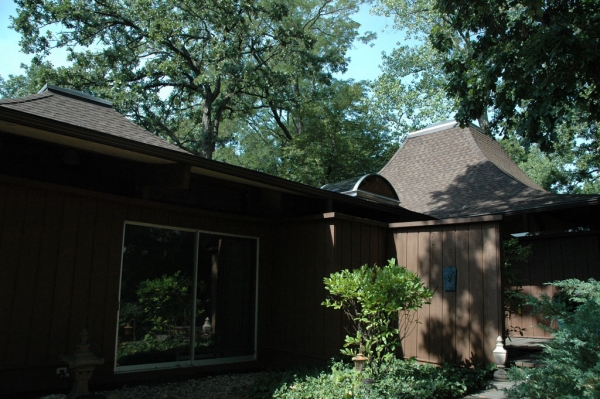 The home’s geometry is as interesting from the outside as it is from the inside, with the Jamaican roofs soaring up into the surrounding trees. 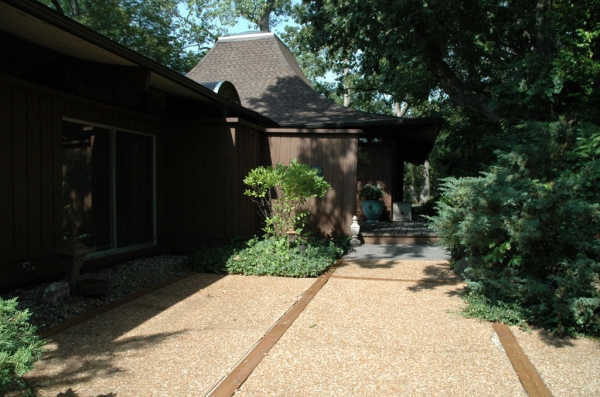 The walkway from the driveway up to the home’s entryway is a combination of aggregate concrete and wood beams, and they lead visitors through an array of planted spaces and rock gardens. 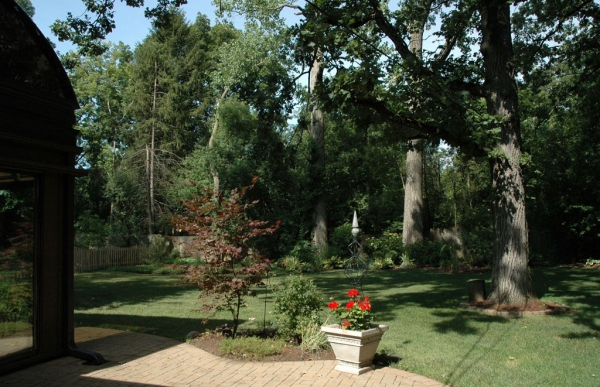 Out back, there’s a brick patio that leads to and alongside the sun room, beyond which is a deep back yard with a number of mature trees that look to be at least a century old. The dense foliage at the back of the yard gives so much beautiful privacy to the area that you might not know that it’s almost directly across from Deer Park and just a few minutes from Route 53. 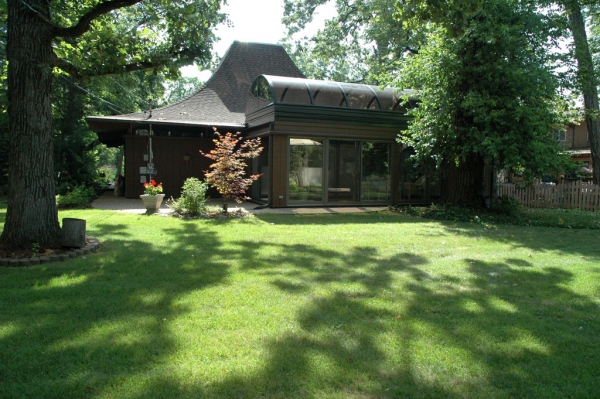 “I’ve loved living here,” says Min. “It’s such a beautiful, open space, and so unique.” The home is currently on the market and some lucky buyer is going to buy themselves a very special home indeed.

UPDATE: If you’ve visited recently and found the link to the listing broken, we’ve updated it (as of 8/26/12) to reflect the new version of the listing.

UPDATE: This home has apparently been taken off the market as of the end of 2012.

3 Responses to "Erickson & Stevens Home for Sale in Palatine"