Being pleasantly surprised by a chance encounter is so much fun. Recently I was driving past a mid-century home that I’d seen and admired before, and the owners happened to be outside at the time. I stopped and chatted with them, and soon we were making plans for me to come visit and photograph their home to write about here.

(click any photo to see it at full size) 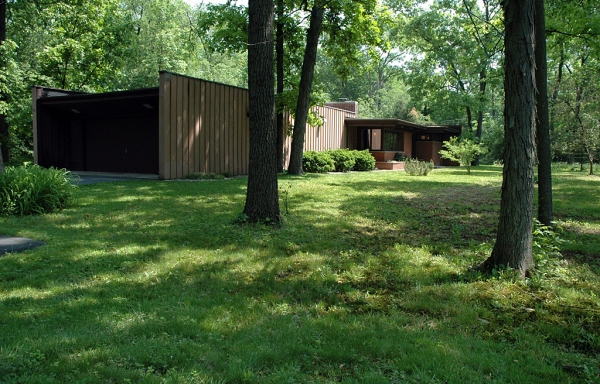 The Long Grove home, designed by architect Richard J. Stromberg and built in 1955, sits on a beautiful lot with a bunch of 100-year old trees. As far as the owners, Lee and Rick, know, Stromberg, who seems to have done mostly commercial projects, designed the home for some friends of his parents.

“They told him what they wanted: ‘We want two bedrooms, a bathroom, some living space, an eating space, a kitchen and a utility room, and a garage’ and he designed it for them,” explained Rick. 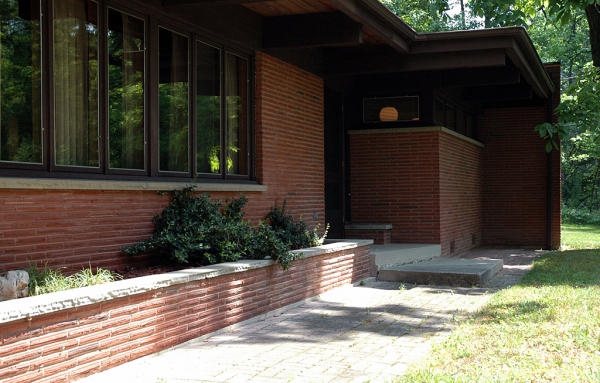 “It was love at first sight for us, both the house and the property,” says Lee. “We love the beamed ceilings and how the exterior architecture was carried into the interior.” 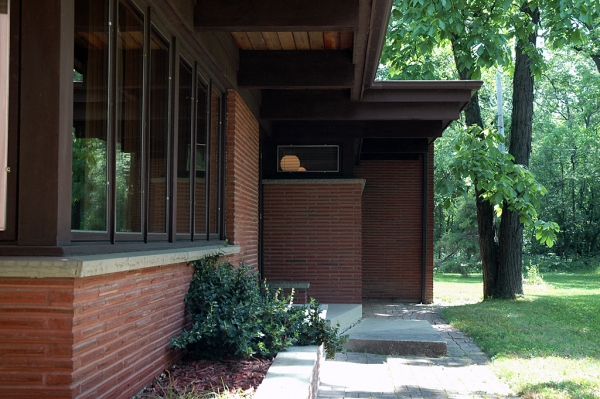 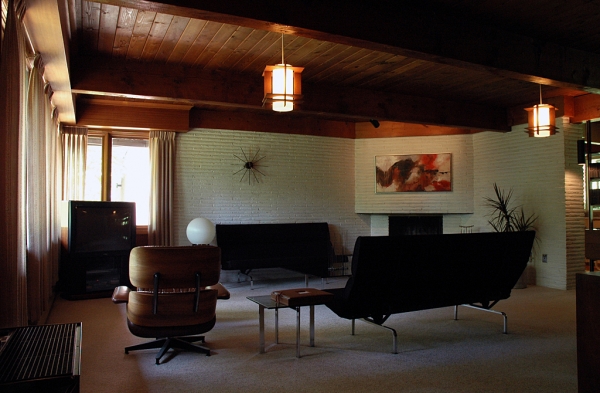 Rick, a retired industrial product designer, also happens to be very handy. The couple bought the house in 1967 and soon realized that the two bedroom setup wasn’t going to work for the family that they were just starting at the time. 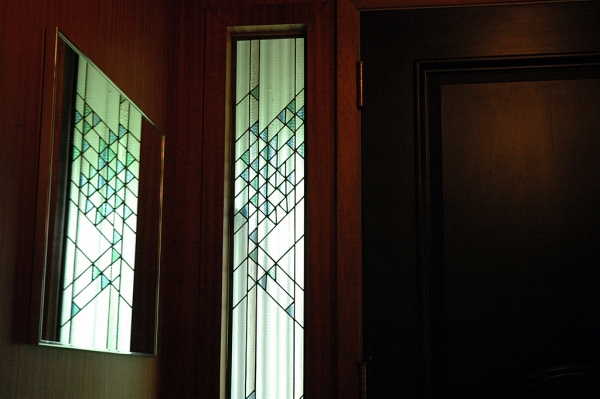 Over the years, Lee and Rick made a number of changes to the home that, thankfully, haven’t changed the character of the home at all. In fact, they’ve made the home more livable for themselves, modernized it, and all the while have kept it true to the home’s original spirit. 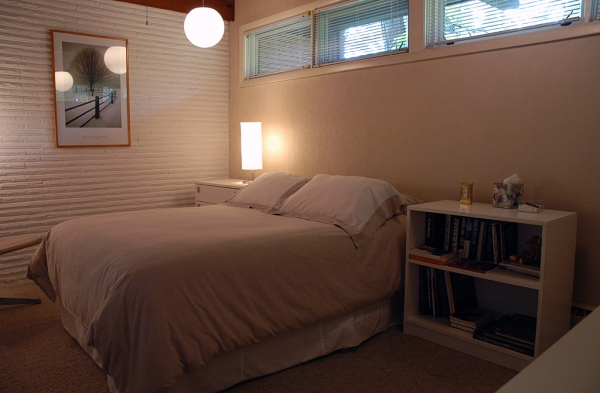 “We divided a huge master bedroom into two smaller bedrooms, because we knew we were going to be starting a family,” says Lee. 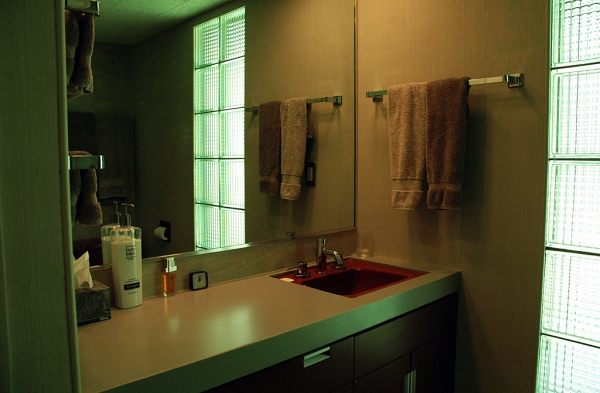 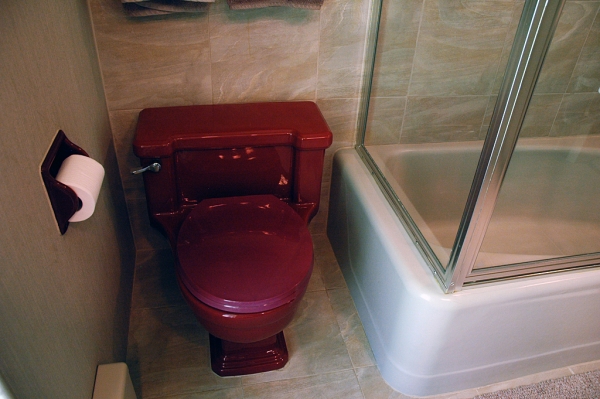 “The one bathroom in the house only had a shower stall,” added Rick, “so we put a tub in there. We re-did the bathroom but we wanted to keep the original character, so we put this tub in, but we kept the original sink and toilet.” 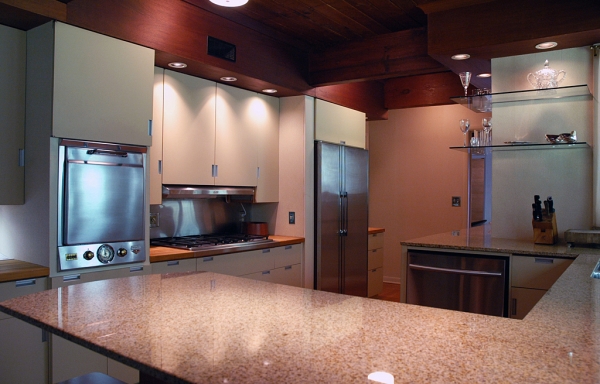 They also expanded and remodeled the kitchen. “The original utility room was just huge. It went all the way from one side of the house to the other,” says Lee. They made the utility room smaller and used the extra space to extend the kitchen toward the west end of the house. 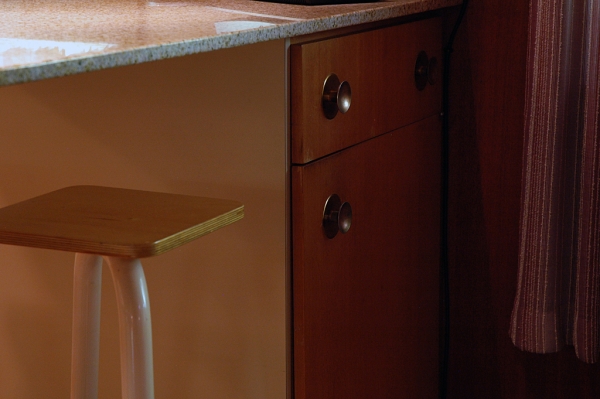 “The original kitchen cabinets were white birch. They had these big, round knobs on them,” says Rick. You can still see samples of these in a cabinet left facing the dining room, as well as on the doors in the room divider / hallway. “It was like all these giant eyeballs staring at us all the time!” continues Rick. The updated cabinets have integrated pulls for a look that’s both cleaner and still fitting with the rest of the home. 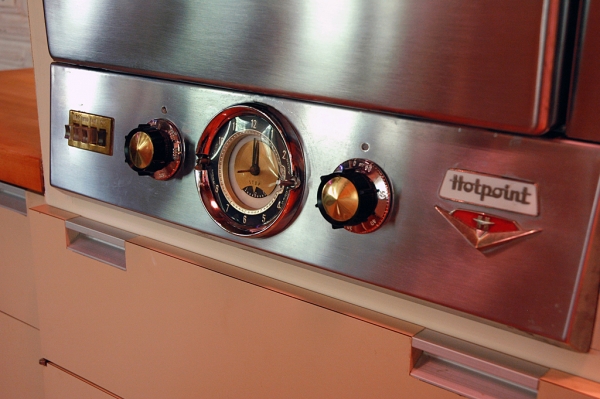 I thought it was really cool that they kept the original, vintage Hotpoint oven. “It still works, so we decided to keep it,” says Lee. “Plus, ovens today are wider,” adds Rick, “so we would’ve had to completely reconfigure this part of the kitchen.” 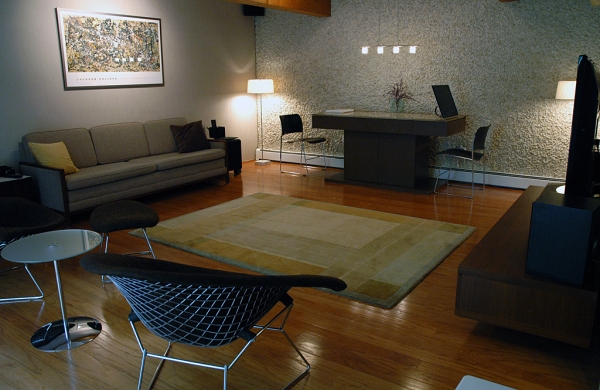 One of the biggest changes was adding a family room and a second bathroom, by moving the original garage out and putting the new rooms where the old garage was. “They literally cut off the last six feet of the garage and just pushed it out, then framed out the new garage,” says Rick.

The added family room features a double desk designed by Rick and built by a friend of theirs. Rick added texture to the south wall by embedding white stone in epoxy. “It was pretty tricky, because the epoxy would dry really fast, so I had to put epoxy on a small area, get the stones in right away and then, quickly, move onto the next area.” The result is great: It bounces natural light from the north windows all over the room. 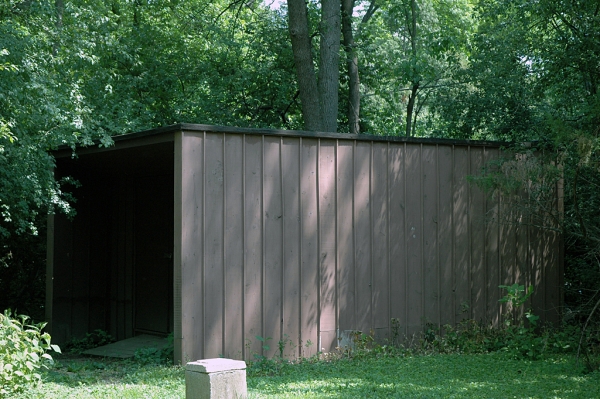 Rick also built a shed in the back yard to match the house, and recently, they re-did the home’s roof.

“When we first had the roof of the house re-done, it was rubber, and when it rained, it was so loud. It was terrible…I thought ‘I can’t live with this!’ Sometimes it was so loud, the raindrops would sound like thousands of marbles hitting the roof!” says Lee. “The original roof had gravel on it,” continues Rick, “and so the people who did the roof for us came back and put small stones up there to sort of diffuse and dissipate the rain.” 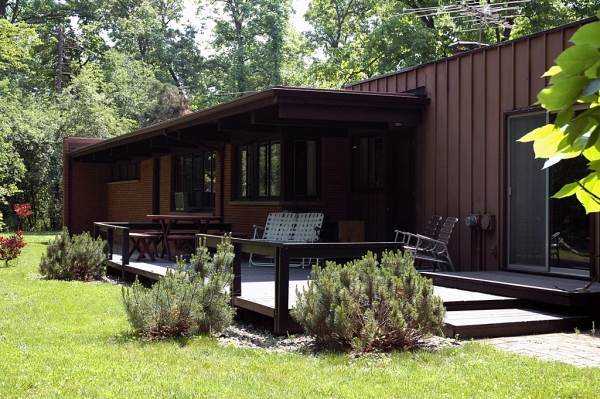 Rick also designed and built a deck on the back of the house with clean, low lines that echo the style of the home. 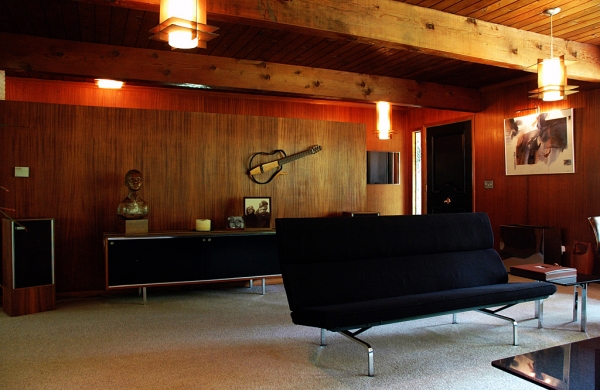 One of the greatest things about the home is that, in addition to the various structural changes and additions that Lee and Rick have made to be consistent with the home’s original character, the furnishings and decor are also very mid-century. 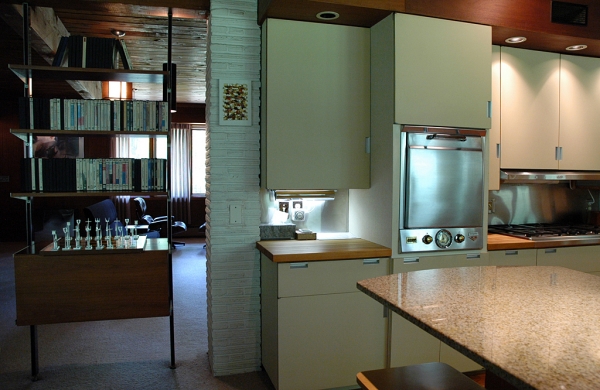 “Once we moved into our house and in order to maintain a mid-century modern look to our furnishings within a ‘reasonable’ price range, we camped out at the annual Herman Miller sale in Holland, Michigan to snag some classic pieces. This required you to be one of hundreds stampeding the entrance and laying your body over whatever you wanted to buy! Several times we did this and purchased an Eames leather lounge chair and ottoman, an upholstered Eames side chair, stereo system credenza, desk, file system that we used as dresser drawers, cabinet system for storage, and file cabinet and drawers for storage.” 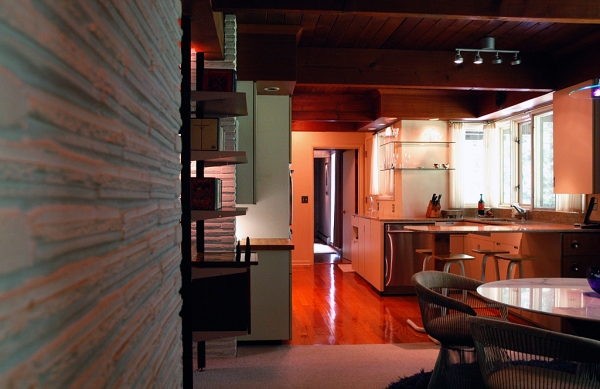 They’ve also had some good luck (and good friends) with regard to furniture: “A dear friend of ours had purchased Warren Platner’s sculptural table and chairs,” says Lee. “We told her how much we loved it and, if she ever wanted to sell it, to let us know as we would want to buy the set. After many years, we did buy it…what was practically a gift! She was a very good friend.” 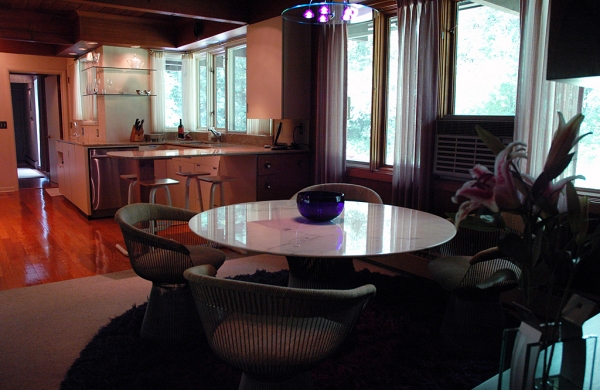 The home is beautifully decorated with classic mid-century furnishings and accessories. In addition, Lee and Rick have had a number of pieces made to suit their decor, either to match existing pieces or built according to Rick’s own designs. 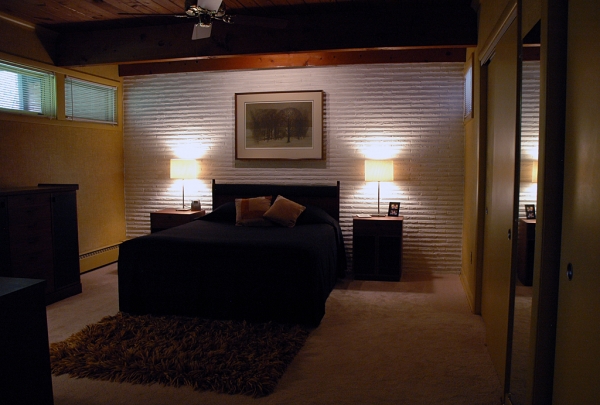 “We had these two pieces in our master bedroom from Founders Furniture,” says Lee. “A friend of ours, who made our kitchen cabinets, made the nightstands to match.” 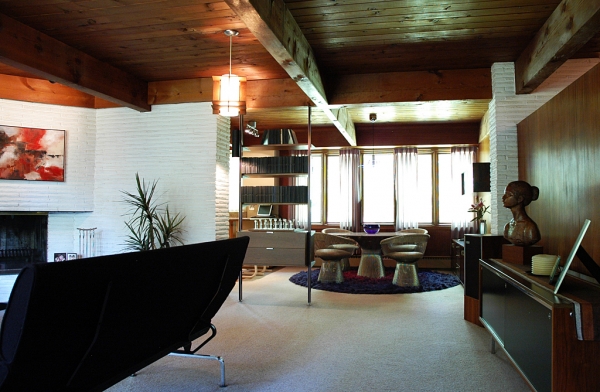 Other changes inside include painting the exposed brick. “We love the red Roman brick,” says Lee, “but with the beams and the ceiling, it was just so dark, so we decided to brighten it up by painting the brick white.”

The couple also replaced the homes original cork flooring with hardwood and carpeting. 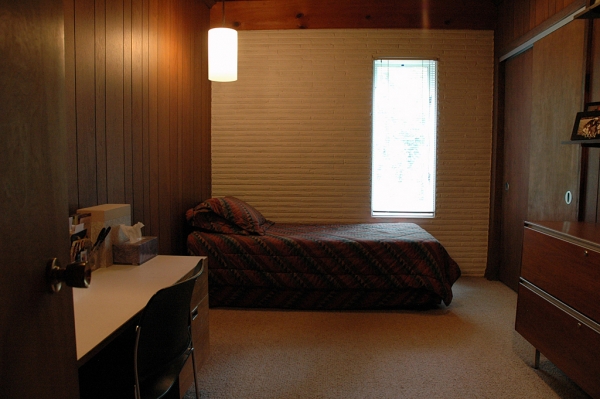 “The other thing we did was, when we split the original master bedroom into two smaller ones,” adds Rick, “the middle bedroom had no windows, so we had this vertical window put in. So the room has natural light, and it still feels right with the original design.” 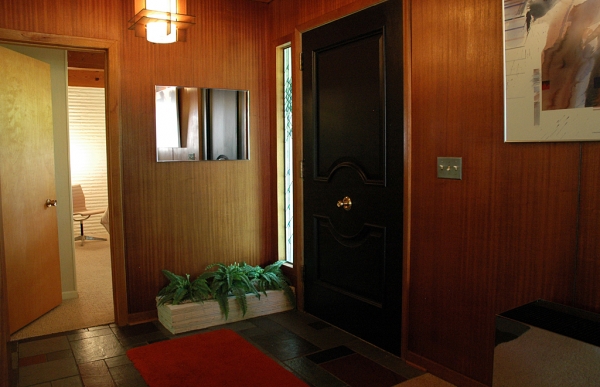 Another cool feature is the planter at the entryway that’s carried in from outside. Next to the center-knob front door, Rick designed the stained glass sidelight, which had the added benefit of being very strong due to the diagonal lines in the design that prevented the window from buckling. 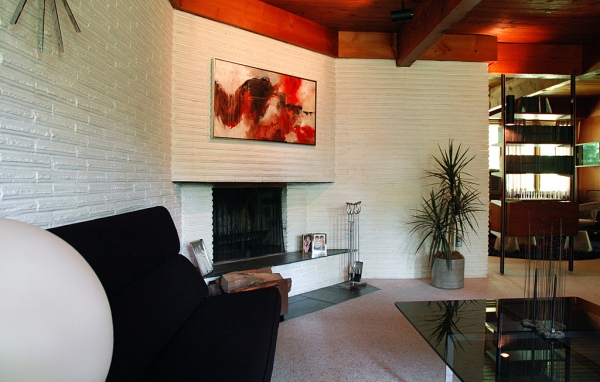 The living room is very spacious and includes a nice angled fireplace feature. And the room divider / closets that form the hallway serve multiple purposes: Not only do they provide ample storage, but they create privacy for the bedrooms and offer a nice, warm backdrop for the living room.

Both the living room and entryway / hallway feature ceiling fixtures designed by and made in part by Rick. 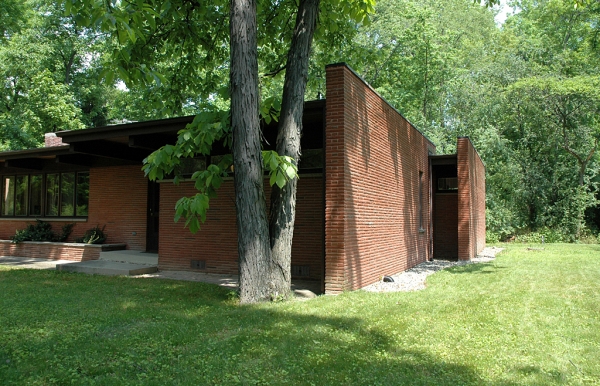 One thing about the home that’s a bit of a mystery is the architect. I wasn’t able to find out too much info on him: Richard J. Stromberg was born in 1915 in Chicago and died in October of 1972. He graduated from Maine East High School in 1933 and at one point he lived in St. Charles. He had two children and, from what I found, mostly worked on commercial projects, including work for a number of local architectural firms: H.V. Von Hoist, William Campbell Wright, R. Harold Zook and Elmer Gylleck & Associates. 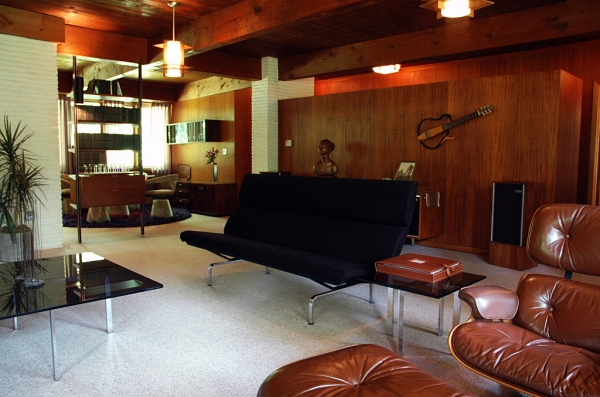 Eventually, Stromberg started his own architectural firm, based out of Elgin, where he’s credited as the architect or co-architect on a number of projects that include Emmie J. Ellis Jr. High School (1951), Vincent Coleman (1952) and Huff (1954) grade schools in Elgin, as well as the Elgin Medical Building (1954), State Bank in Algonquin (1954) and a warehouse for a company called KPA (1955) in Melrose park.

I wasn’t able to track down any other residential projects or his kids, so if you know anything about Richard J. Stromberg, please leave comments below! 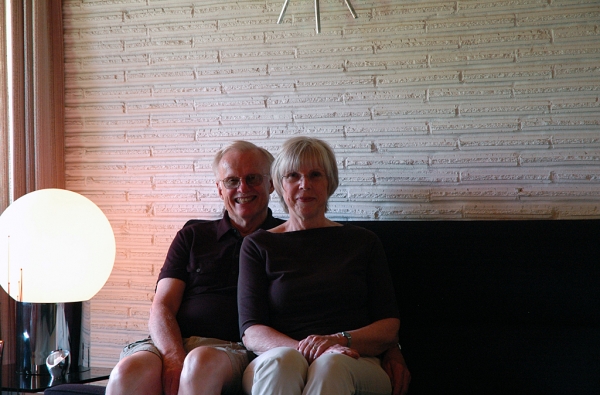 It was such a treat to have met Lee and Rick, and even more so to be able to get a look at and inside their home and to hear all of the stories that go along with it. I hope you enjoy looking through these pictures as much as I enjoyed taking them!