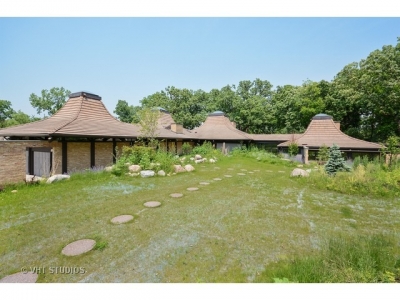 A few years back, the personal estate of Don Erickson – master apprentice to Frank Lloyd Wright and my favorite “local” architect – went on the market and ultimately sold for a mere $835,000.

While not a trivial sum, I say “mere” because Don’s home was considered by many people lucky enough to have been inside to be a masterpiece. With signature elements such as multiple instances of his “Jamaican roof”, large curved laminated beams, indoor growing plants, massive brick fireplaces, radiant heat floors, an indoor pool, many skylights and more, the home had a flow and character unmatched by any other home I’ve had the pleasure of seeing in person in the Chicago area.

Here are some quick snapshots I took while there…they certainly do not do the home justice:

And here are some other photos of the home I found various places online:

[UPDATE: Please note the listing has since been removed. The house may be coming back to market at some point in the future]

I’ve seen lots of photos of the home as it is now, but I’ll be seeing the inside of it soon, and then I’ll know the full effect of all the changes made over the last four years. It’ll be interesting to see how the various changes have affected the overall vibe of the home and grounds.

Let’s all celebrate the fact that the current owner who’s selling the house now (at a price of $3,975,000) didn’t tear it down and build a McMansion. Whatever changes he made, he did so because he felt they fit with the home’s original style in a way that also suited his own personal needs. And whoever ultimately buys the former home of one of the Chicago area’s most interesting architects will be living in a spectacular work of art.

I’ll update this post after I’ve seen the house over the next couple of days.

In the meantime, if you’d like for me to arrange a private showing, please contact me at lou@modernil.com or 312.907.4085. I would love to help somebody else who’s a fan of Don’s work buy and love this home for many years.

After touring the house this past weekend, let me just say for the record that I’m so happy this house wasn’t simply torn down. The current owner has put a lot of money into updating some of the home’s systems, such as the radiant heat. He also opened up the kitchen / dining room area by removing the pantry and dining room walls. The indoor pool was updated, and the floor in that space made to be more congruous with the rest of the house.

Apparently the county required that the Jamaican roof structures used additional support members, which are all new.

There’s also been quite a bit of landscape modification, in order to better control water during heavy rains, etc., and there’s an all-new lap pool outside, plus and outdoor kitchen and recreation area. The guest house (although not available during the open house last week) has also been completely remodeled and is now much more of a complete guest house, whereas before it was half guest house-half garage / workshop.

I also like the wider hallway leading to the master suite, and the amount of light that comes into that hallway now.

This house has quite a bit of space and lots to look at everywhere. And, of course, it represents an opportunity to own the personal residence of one of the Chicago area’s most creative architects.