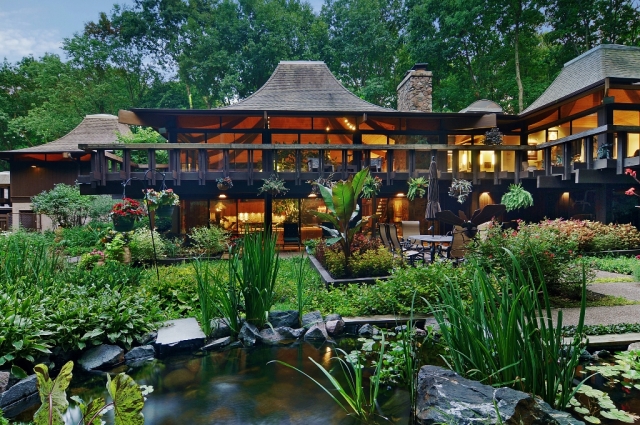 On Sunday, August 4th, 2013, from noon to 3pm, Chicago Bauhaus and Beyond members and their guests will have the opportunity to experience three amazing homes in Riverwoods and Highland Park. One of the homes, in Highland Park, was designed by Calvin Jay Tobin in 1968. Tobin was a partner of Edward Dart, who’s fairly well-known in the Chicago area.

The other two homes, another in Highland Park and one in Riverwoods, were designed by Dennis Stevens. As some of you may know, Dennis was the long-time partner of Don Erickson. They worked together from the mid-’50s until the ’90s, when Don, whose health was failing, chose to work from home for the remainder of his years.

And by the way, all three of these homes are currently for sale! 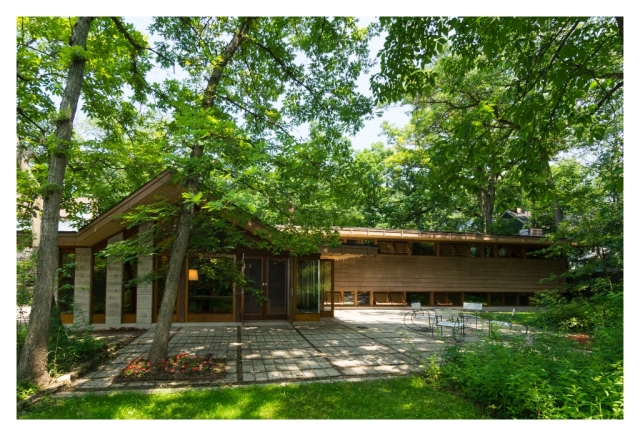 When I learned that CBB would be touring these fantastic homes, I spoke with Dennis to get a few words from him on the homes. But first, before we talk about the houses themselves, a little history…

Those familiar with Stevens’ work probably already know that he was the youngest apprentice to Frank Lloyd Wright. 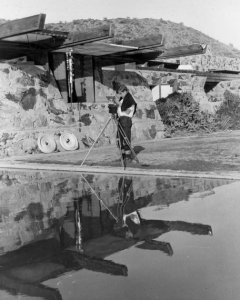 “I was 17, and it was about 2 weeks before my high school graduation when I first contacted Mr. Wright,” says Stevens. “I showed him an isometric drawing I’d done of a home – a sort of 3-dimensional view of it – and I had drawn every board of the framing. Mr. Wright said ‘You did this?’ and I said ‘Yes’ and that was it. I finished high school, then I was up at Taliesin for several years, and then I served for 2 years with the CE as an architect for a NATO base near Verona in Italy.”

After returning to the U.S., Dennis began working with Don Erickson in the mid-’50s. Due to the unusual nature of many of the homes designed by Don and Dennis, most of their projects were design + build.

“We used mostly residential contractors, and we put together a team of people over time who we’d work with over and over,” says Dennis, “because they knew how we designed and how things needed to be built and how to deal with the parts of our designs that weren’t traditional.” 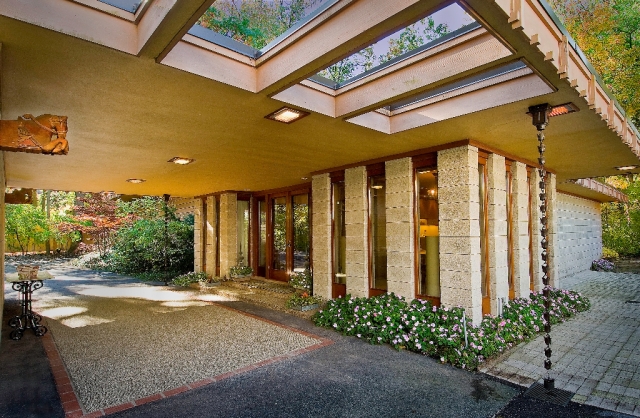 The house that Dennis designed in Highland Park that we’ll be visiting on the tour was the 3rd house he designed in Illinois. “The first was on Murphy Lake in Park Ridge,” says Dennis, “and then the second one was an octagonal one in Barrington. This one was the 3rd one and I used to joke that it was the ‘house that was never finished’ because the owner kept updating and modifying and adding things to the interior, as he was an interior decorator.” 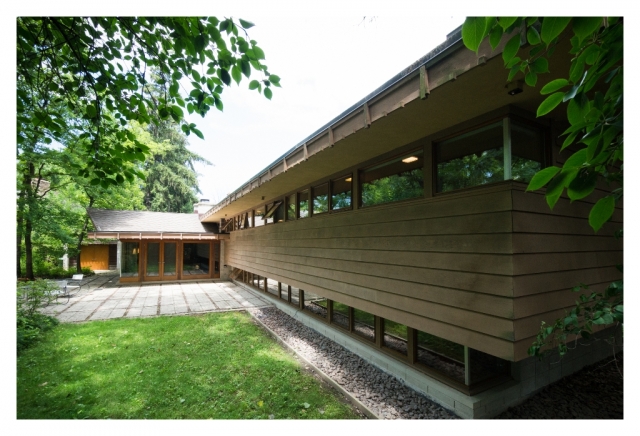 “Originally the house had a carport, but that got turned into a garage. And then there was a tool shed that was added to be compatible with the house. The house has been landmarked by the town of Highland Park,” says Dennis. 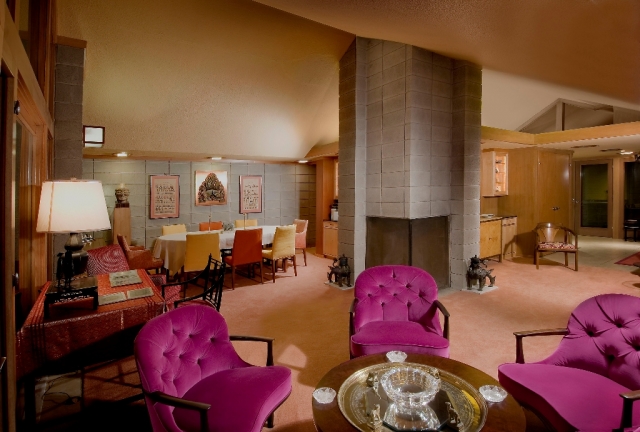 The Highland Park home features a variation on post-and-beam construction, where the traditional wood posts have been replaced with columns of concrete block. The house includes a number of floor-to-ceiling windows and glass doors, as well as many clerestory window banks and plenty of wood on the interior. Together with some built-ins, this home has a tremendous amount of warmth and character.

The other house on the tour, in Riverwoods, may be more recognizable to fans of Erickson & Stevens homes, due to the multiple instances of what Don and Dennis called their “Jamaican roof”.

“The Jamaican roof is something Don and I came up with together,” says Dennis, “and the idea came from some buildings we’d seen while working in Jamaica. The idea is actually pretty similar to a gambriel roof, but upside down and backwards.”

Homes with an Erickson & Stevens Jamaican roof are often referred to by neighbors, and even some owners, as “pagoda” houses, since, at first glance, they resemble that roof line so often associated with traditional Japanese architecture. 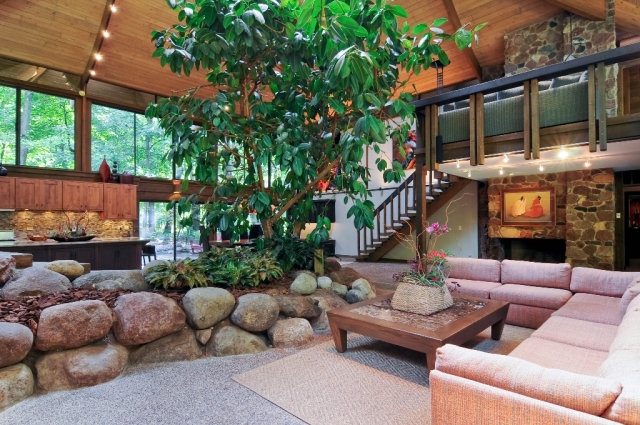 At the top of every Jamaican roof, however, is a bubble skylight. And, usually, the space underneath the roof on the inside of the house is mostly open into that volume.

“The Riverwoods house was one of the first we built with a Jamaican roof,” says Dennis. “The woman who I designed the house for rented space from a building of ours on Lee Street in Des Plaines. She got this piece of land in Riverwoods, and she asked if I’d work on a deisgn for her, and I said ‘Sure!'” 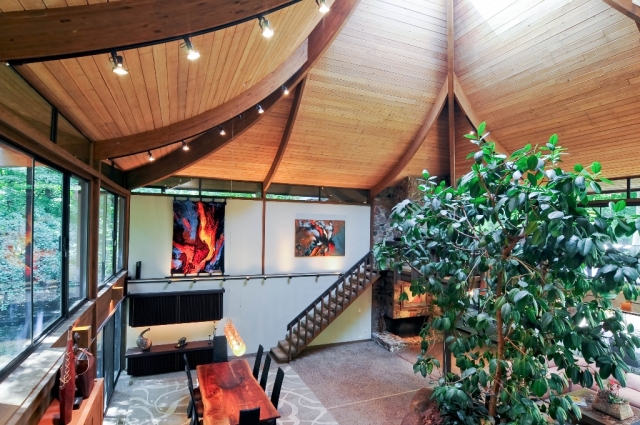 “The main living space of the house is a 39-foot square…and there are a couple of 26-foot square sections in the house,” continues Dennis. “That first big room, when you walk in, you actually walk up to the front door, so that when you walk in, you’re on the upper level looking down into the living room and that whole big open space. I designed it with lots of indoor plants, which is something she wanted, and we left a big mound of earth and rocks in that space, too, so that you walked down to the living room through the forest.” 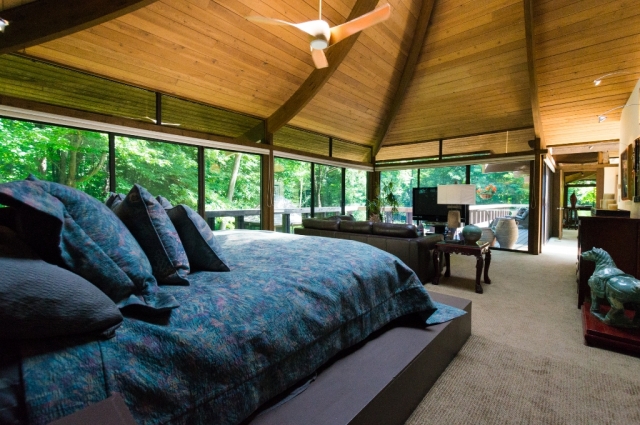 But even more than the organic nature of the home, what always gets people in a house with a Jamaican roof is the roof itself, and the dramatic nature of being in that space. The roof is constructed with what Don & Dennis described as a “compression ring-expansion ring” system, using massive, curved glulam (pronounced “glue-lam”) beams that they had made to specification for each project by a company in Missoula, Montana. 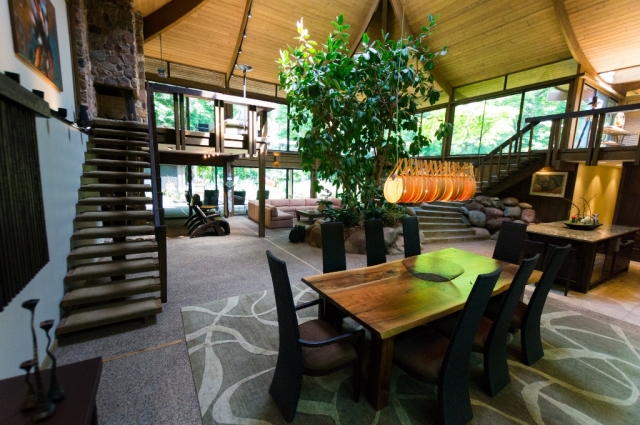 “The glulam beams come together at the top with some other heavy beams that make a frame that the skylight goes into,” explains Dennis. “And then they curve down and at the bottom, they rest on the posts around the perimeter of the house. When we built the first few homes with the Jamaican roof, we put support columns about halfway up each of the main hip glulam beams. And then we put double tongue-and-groove decking on top of the beams, so that the ceiling and the roof are the same thing. Of course we put shingles on the outside of the roof, too.”

“But what happened,” says Dennis, “is that when we’d go to start putting the decking on top of the beams, once the weight of the decking was distributed on the big curved beams, they’d start lifting up off of those 4×4 columns, and we thought ‘Gee, we really don’t even need those supports.'”

While the earliest Jamaican roof homes (several that Erickson & Stevens designed and built in Palatine including Dennis’ own home of many years, as well as others in Winnetka, Wooddale and even in Jamaica itself, and a restaurant in Mt. Prospect on River Road that’s now, sadly, in a state of disrepair) had these support columns, the Riverwoods home doesn’t have them, leaving each area wide open to the space above. 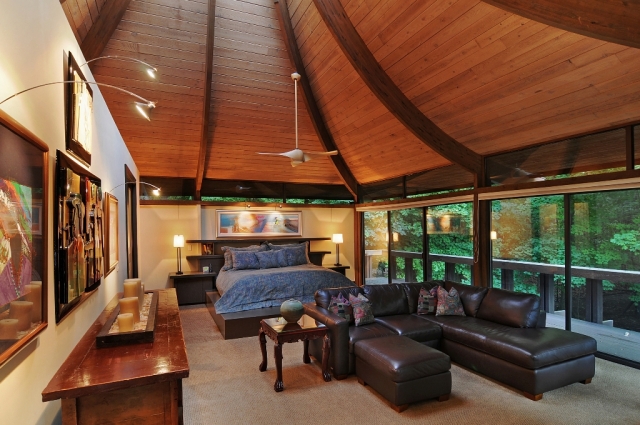 The result is breathtaking, as entire sections of the home open up into those soaring volumes, with natural light pouring in and bouncing off the texture of the pecky cedar wood ceiling, creating a warmth that you have to experience to appreciate – pictures definitely do not do it justice. (so make sure you take part in the tour!!)

As Dennis and I finished our chat, I asked him “Would you still design a Jamaican-roof home if somebody wanted one?” and Dennis replied with a simple “Yes, sure, have them call me!” 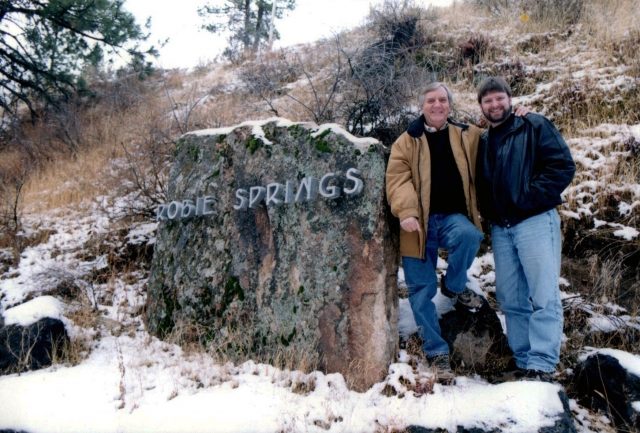 Dennis continues to work as an architect and developer in the Boise, Idaho area with his son Sean.

If you’d like to Join Chicago Bauhaus and Beyond and take part in this rare opportunity to visit all three houses on August 4th, 2013, visit the CBB website here.