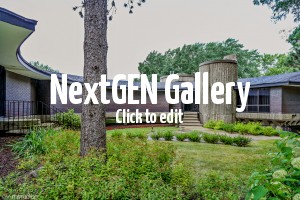 “I used to get all these architecture magazines, and I got a lot of ideas from them,” says Gedas Bliudzius when asked about the inspiration for the home he designed and built for his family in 1967. “It was the only house I ever did.” Bliudzius (pronounced “blue-jiss”), a former residential contractor foreman, only lived there for about seven years.

NOTE: See the “UPDATE” at the end of this article for information on the home’s probable architectural inspiration!

The house, a striking arc covering more than 180 degrees and punctuated by three cylindrical, striated concrete towers, sits on a 4 acre lot that slopes down from the street, then levels off at the back where the pond and tennis court are. Constructed of brick and concrete, the home plays to both Mid-Century Modern and Brutalist (from the French “béton brut” or “raw concrete”) architectural styles.

“My neighbors thought I was building a hospital or something when they saw all the concrete,” jokes Bliudzius. The concrete aspects are the most striking – aside from the overall shape. “Those grooved concrete sections were made with forms,” explains Bliudzius. Typically seen on commercial buildings, the home features the material in a number of places: On the towers and then in a band that runs around the circumference of the home and even across the two concrete decks off the living room and Master suite.

“I built the house in 1967,” says Bliudzius, “and then I enlarged the lower level and added the pool later”. Originally, the lower level was just a foyer off of the carport (enclosed by a subsequent owner into a garage) as well as a laundry and utility room. When Bliudzius expanded the lower level by excavating out under the main part of the house, a large Rec Room was added along with three half baths to service the pool area just outside. In addition, a fifth bedroom with a private bathroom was added at the same time, underneath the living room deck. “That was about 6 years after I built the house,” continues Bliudzius.

“When I sold it, the guy who bought it was the son of a banker in Ford City or something like that. I heard that he used to have big parties there, with people flying in in helicopters that would land in the back yard,” says the home’s designer and builder.

The home is now on its fourth or fifth owners since Bliudzius sold the house in the early ‘70s.

“We searched on keywords like ‘modern’ and ‘contemporary’ when we were looking for our next home,” says Devjeet, who owns the home with his wife Anna. “But the house didn’t come up. Anna decided to do a search based on the word ‘unique’ and it popped up!”

Unique is an understatement. Once past the home’s striking exterior, visitors are welcomed by a flowing swath of terrazzo flooring leading either to the left toward the dining room, or toward the living room on the right. The living room features a fantastic brick and concrete fireplace with matching firebox set into one of the three concrete towers – one that also hides the stairway to the walkout lower level. In addition, the living room affords access to one of the two architectural concrete decks. And it’s one of several spaces in the home that’s very generously-proportioned, although from the street, the home is deceptive in its size.

“We felt it was smaller than we expected when we saw it in person, compared with what we saw in pictures beforehand” says Anna. “Once we went inside, though, we felt the space. We realized it’s the unique shape of the house, because the front is the inside of the curve, which is smaller. The outside curve, at the back of the house, is much larger.”

All told, the home encompasses over 4,700 square feet of living space including 5 bedrooms, 4 full baths and 3 half baths, the step-down living room, the two decks, kitchen, dining room, the extra spaces in the Guest suite, and a Recreation Room that offers the biggest space of all.

Measuring in at a massive 36′ x 19′, the lower level Rec Room features clerestory windows facing the front and banks of floor-to-ceiling windows looking out back toward the pool, pond and tennis court. There’s also a wet bar that echoes the shape of the built-in banquette table in the kitchen, all set over the polished concrete floors.

“We love the grooved concrete columns in the recreation room, and the seamless flow of the turrets’ concrete texture from the outside that continues inside,” says Devjeet, “and the terrazzo foyer, which adds character to the house.”

Wonderful materials aren’t the only special feature here. The home was originally designed with a completely separate guest apartment at the southeast end of the house, with a bedroom, secondary living space, a bathroom, and a tiny kitchenette.

“We immediately decided to make the Guest suite space more usable for us,” says Devjeet. “We included it as an extension of our Master suite, with an option to lock the door from either side for privacy in case we had guests staying there. The bathroom upgrade we did a year later.”

In fact, that wasn’t the only upgrade. The sunken Master suite bathroom, also inside one of the concrete towers, was upgraded with a new tub, tub surround and lighting. Recessed lighting was also added to all of the other bedrooms. The fifth bedroom, on the lower level, received new insulation, drywall and a new porcelain tile floor. All three concrete towers were upgraded with new roofs and skylights, and many trees and other landscaping were added to enhance the yard’s privacy and natural beauty.

Above the sunken Master bath, stairs lead to the only elevated portion of the house: A 13-foot diameter room that Bliudzius used as an office, but that Anna converted to a large walk-in closet. “There’s plenty of closet space in our bedroom,” says Anna, “but I loved the idea of having all of my things there around the circular walls. With the natural light coming in from the skylight, it’s easy to see everything.”

While the list of improvements is extensive, Devjeet and Anna were careful not to affect the home’s character negatively, leaving many details, including the wonderful brick, concrete and wood half baths at the pool end of the house mostly intact.

And even the pool fits with the building’s overall geometry, shaped as a large trapezoid that continues the “arc-segment” theme of the home’s plan view. “We love spending time on the patio by the pool in the summer,” says Anna.

Now moving to be closer to Anna’s parents, their family is sad to leave the very special home that they love. The silver lining, of course, is that this presents an opportunity for a new owner with an eye and appreciation for something special to call this unique property “home”.

UPDATE: Feb 4, 2016. Since originally writing this piece, I learned that the original plans that Bliudzius based his home on appear to have been designed by architect Dean Bryant Vollendorf.  The architect contributed plans to a number of publications in the ’60s and ’70s, and one such plan Vollendorf called Baysweep. This is the plan that 22462 N Bertha Ln seems to be based on (see gallery below), although the Bertha Ln house was scaled up significantly from the original plan, and expanded as well.

What the plan shows as the “Guest” room is actually the dining room at Bertha, and there’s an additional Guest room in the Bertha floor plan. The biggest change of course is that the Bertha house continues the ring into where Vollendorf’s plan has the carport. This continuation houses the apartment that was formerly completely separate from the main house, but now can be accessed through the master suite.

Bertha’s garage is under the sunken living room, and has a complete lower level that Vollendorf’s plan lacks – with a bedroom with en suite bathroom, utilities & laundry, huge rec room with bar and the three half baths that serve the pool area.

Vollendorf once worked for John Randal McDonald, and taught architecture at the University of Oklahoma. In addition to being an architect, Vollendorf was also an artist. You can find more on him by visiting the Facebook page called Friends of Vollendorf, and there’s an article about him at OkieModSquad here. 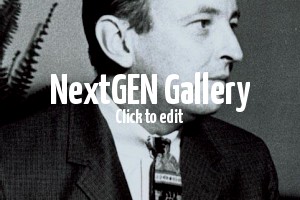 NOTE: This home has sold.