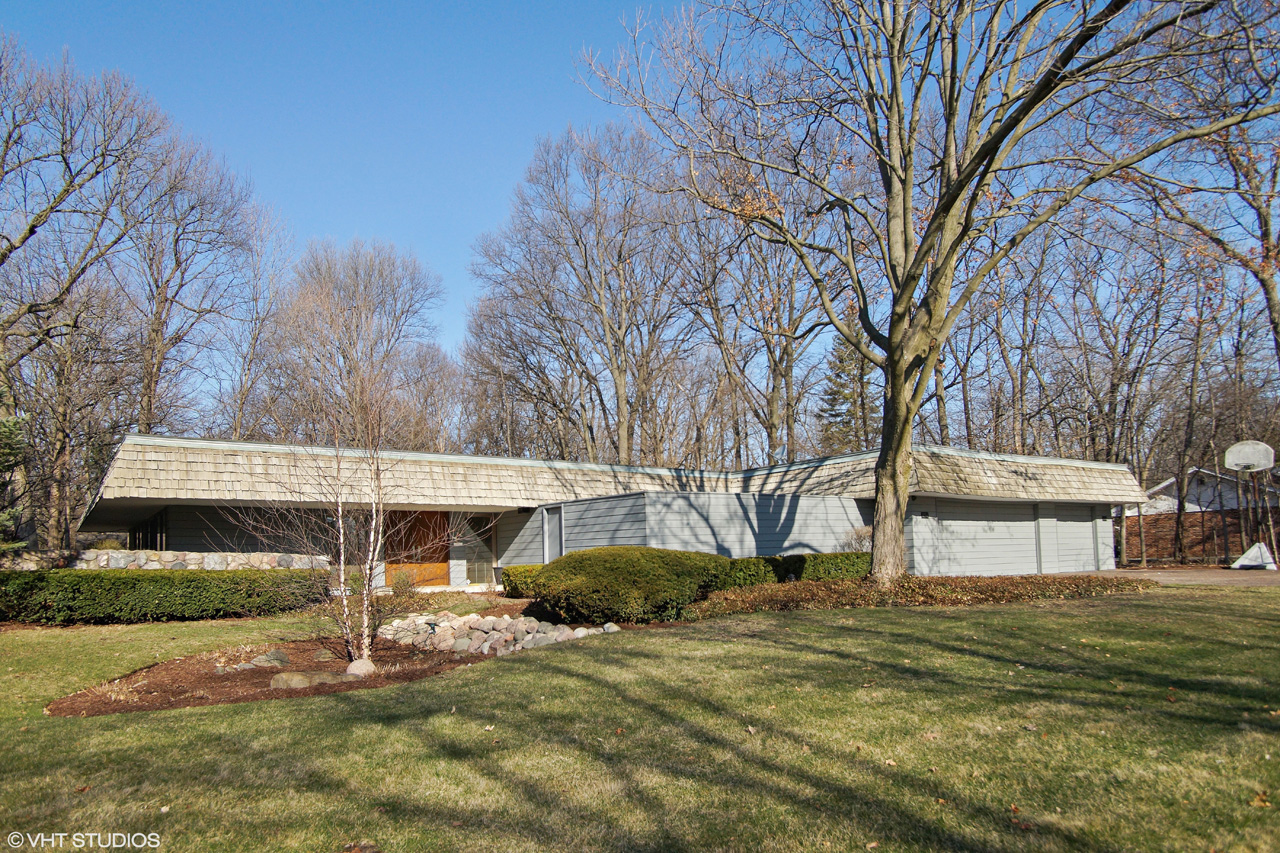 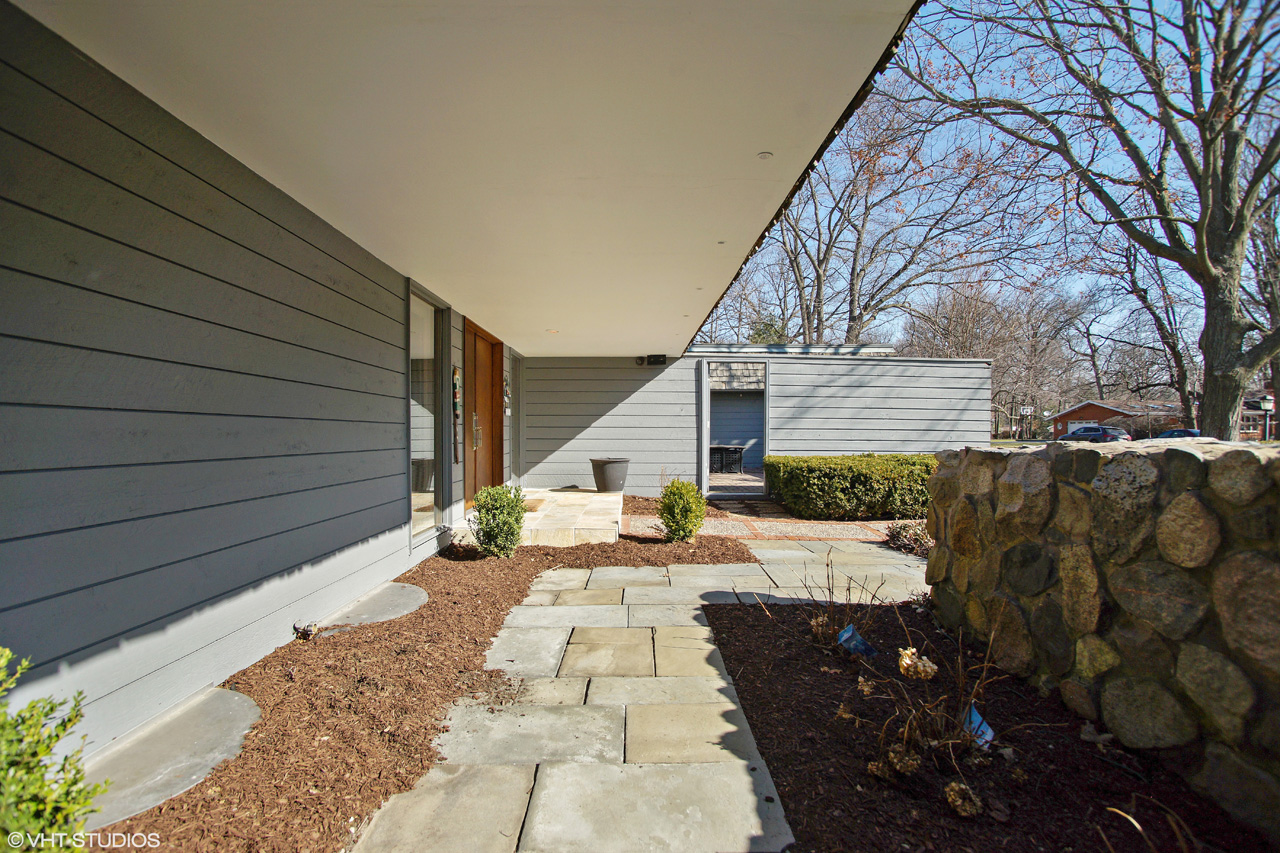 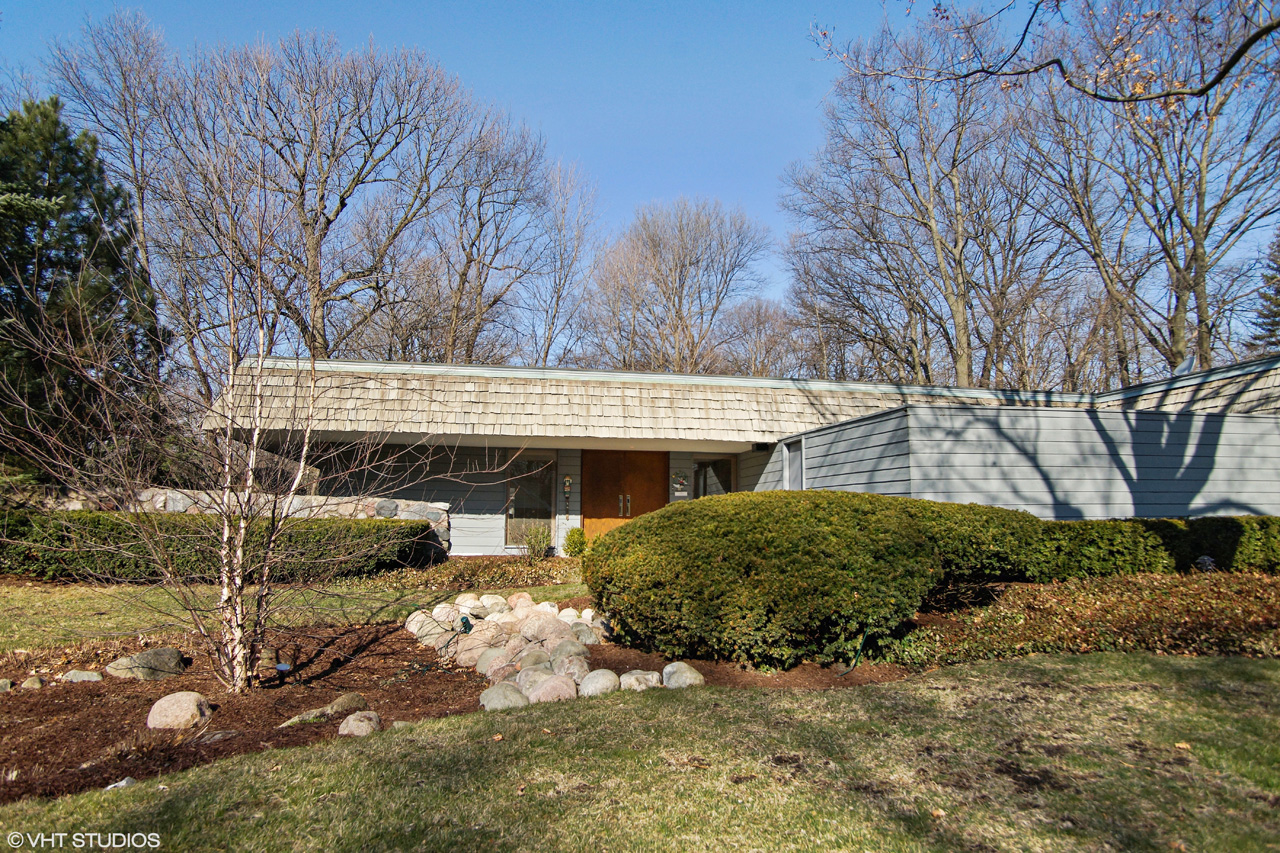 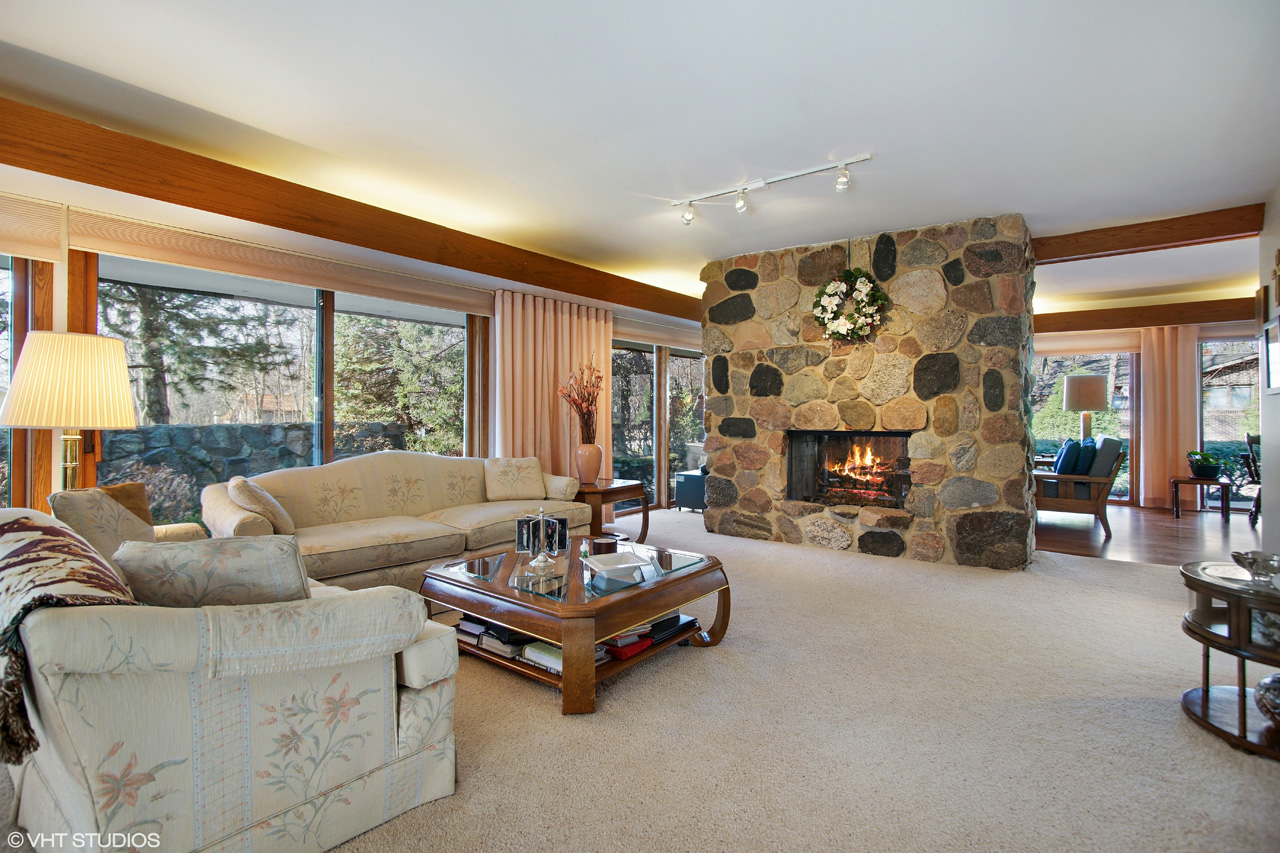 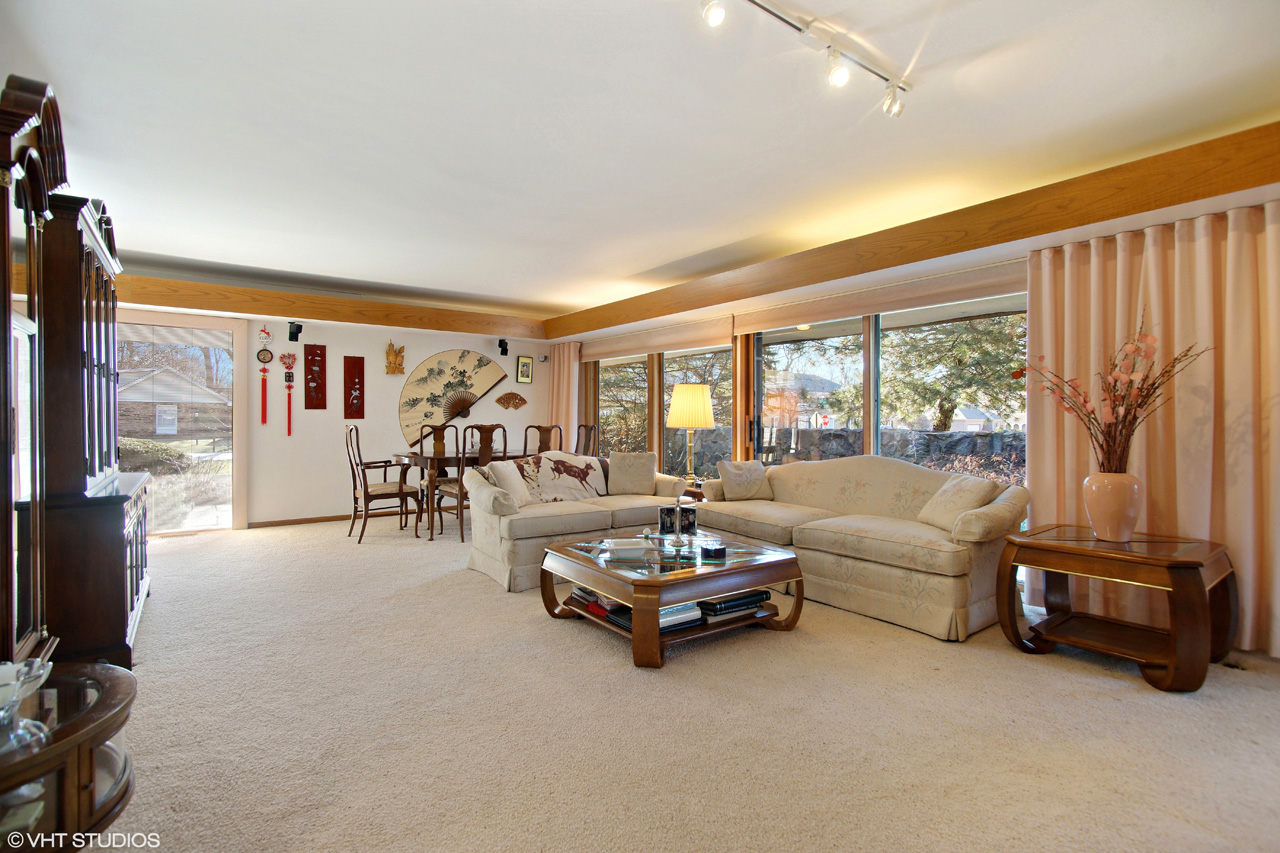 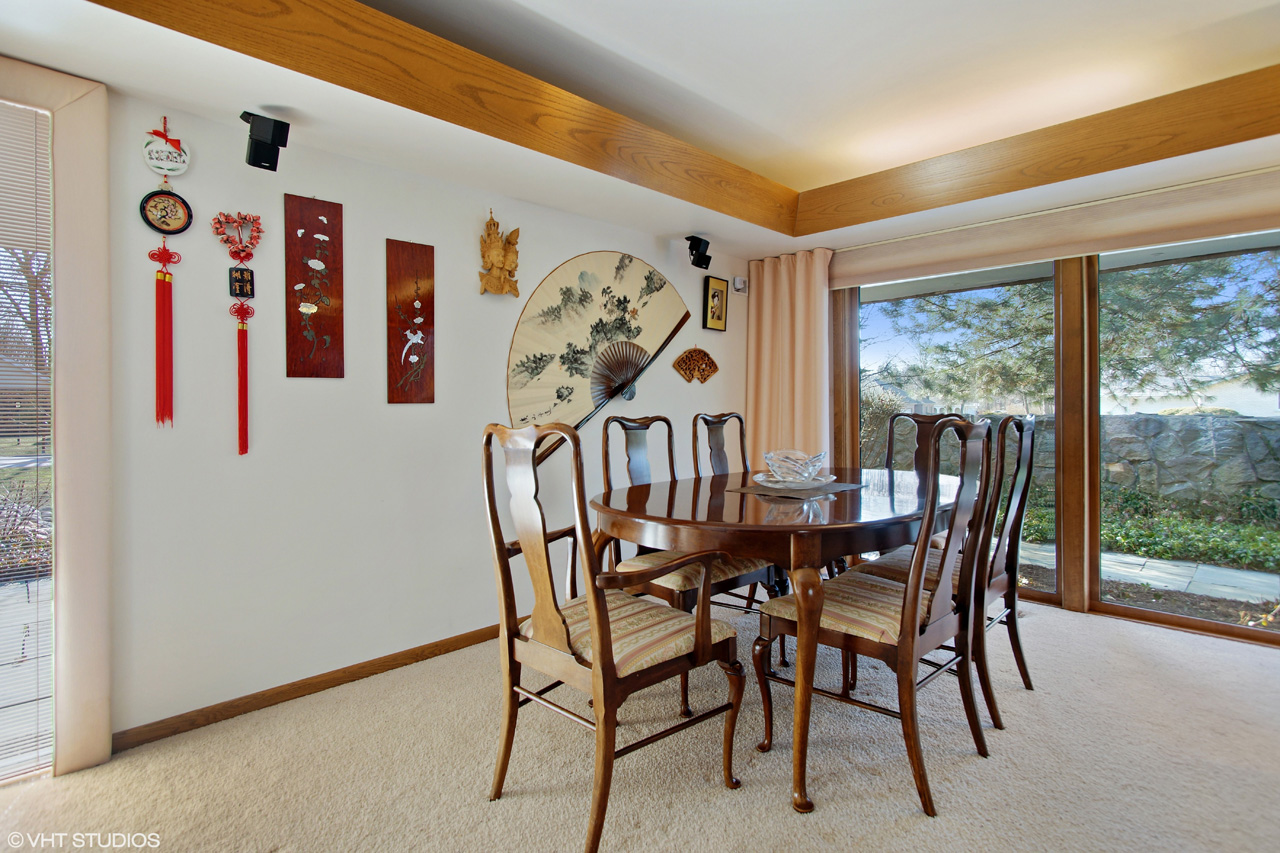 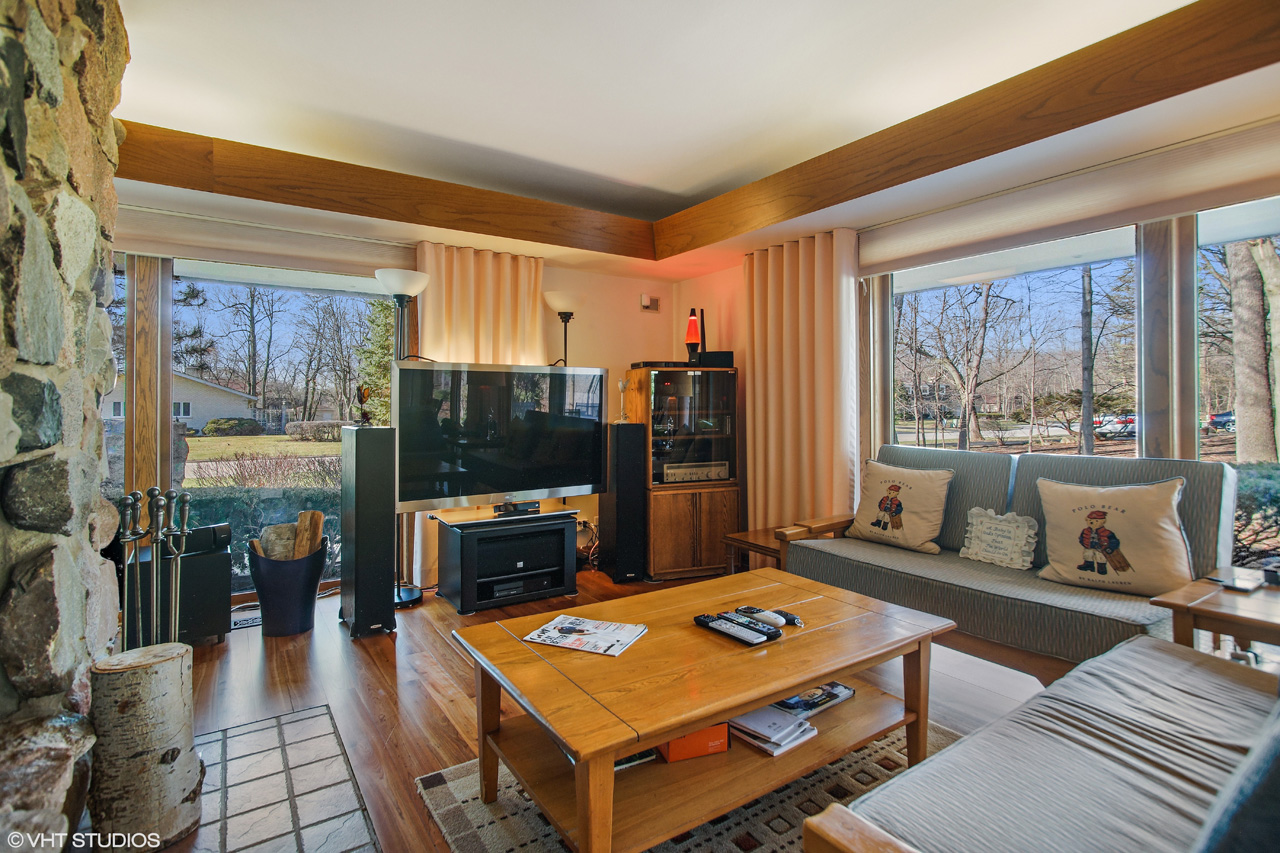 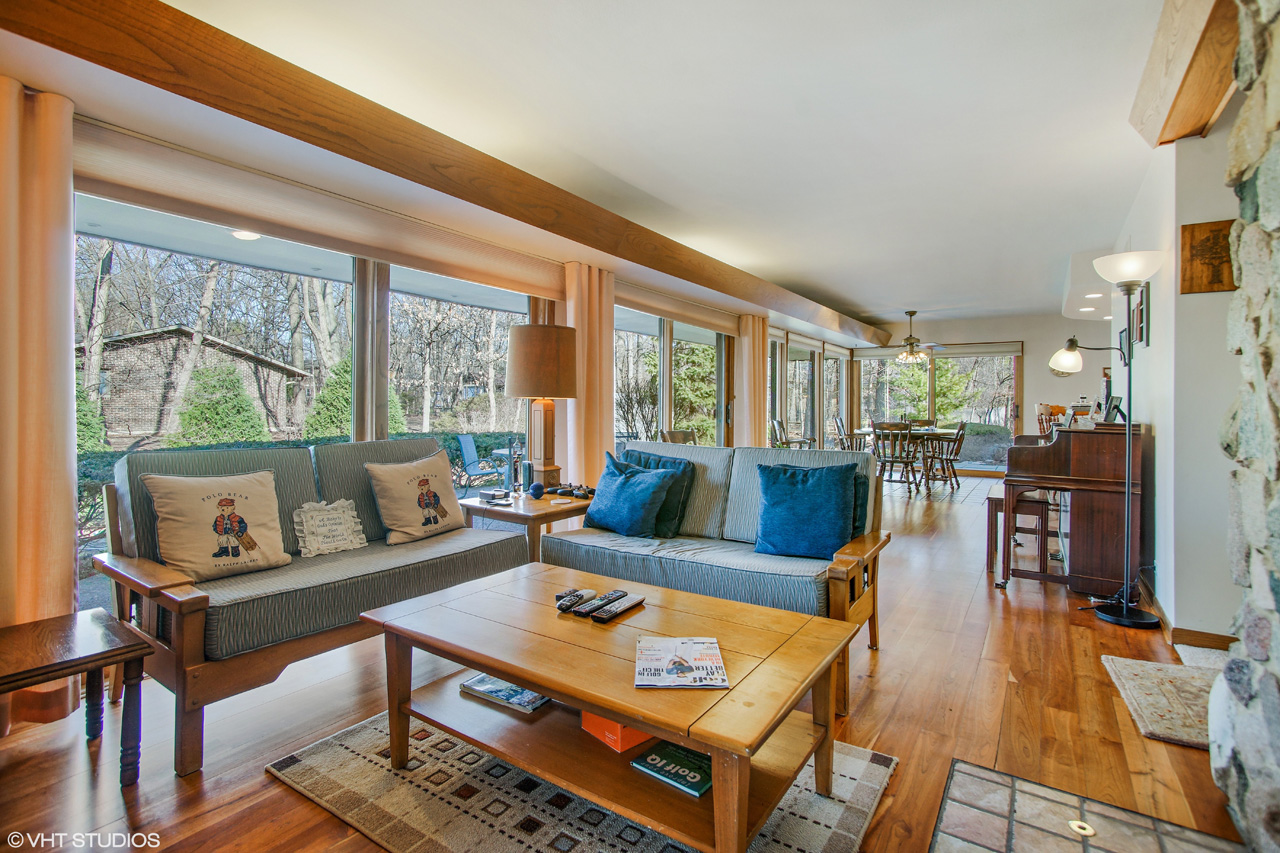 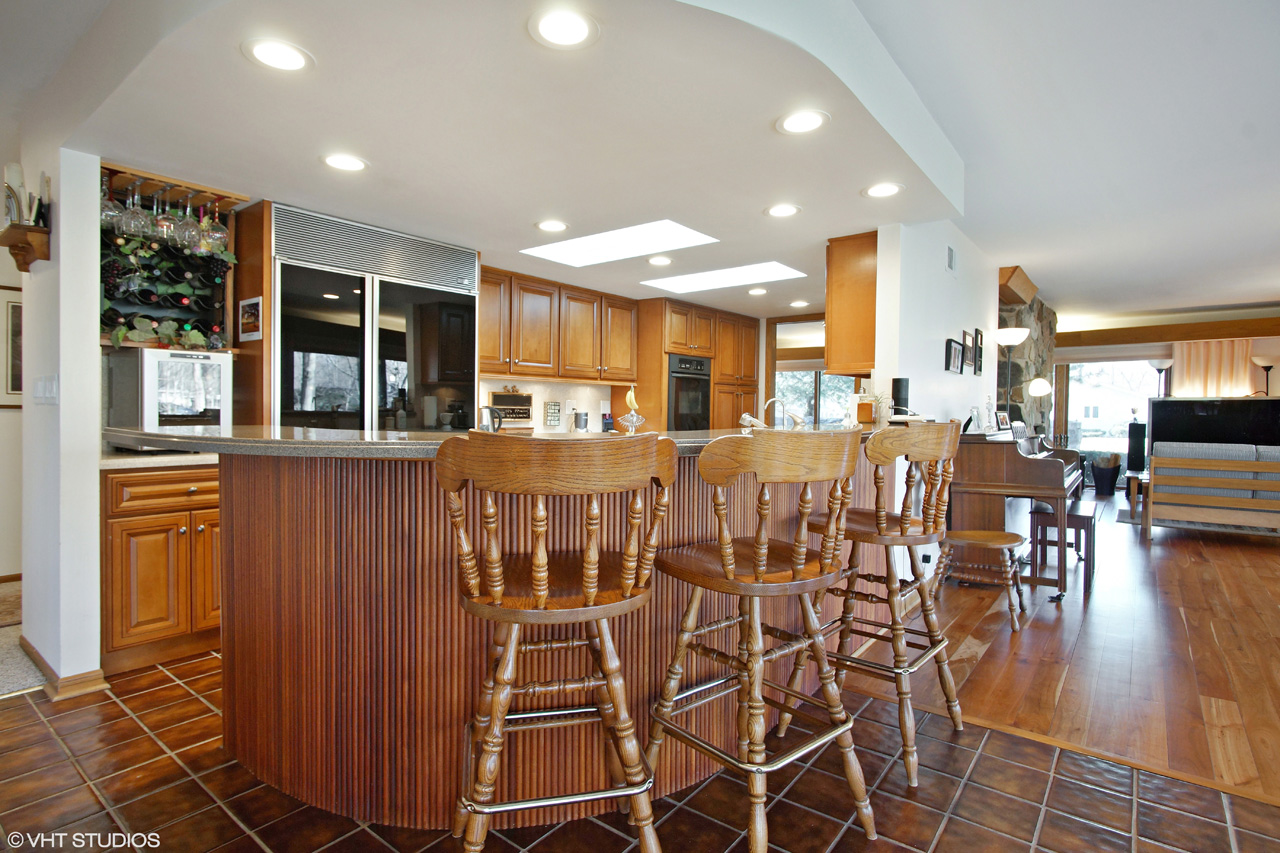 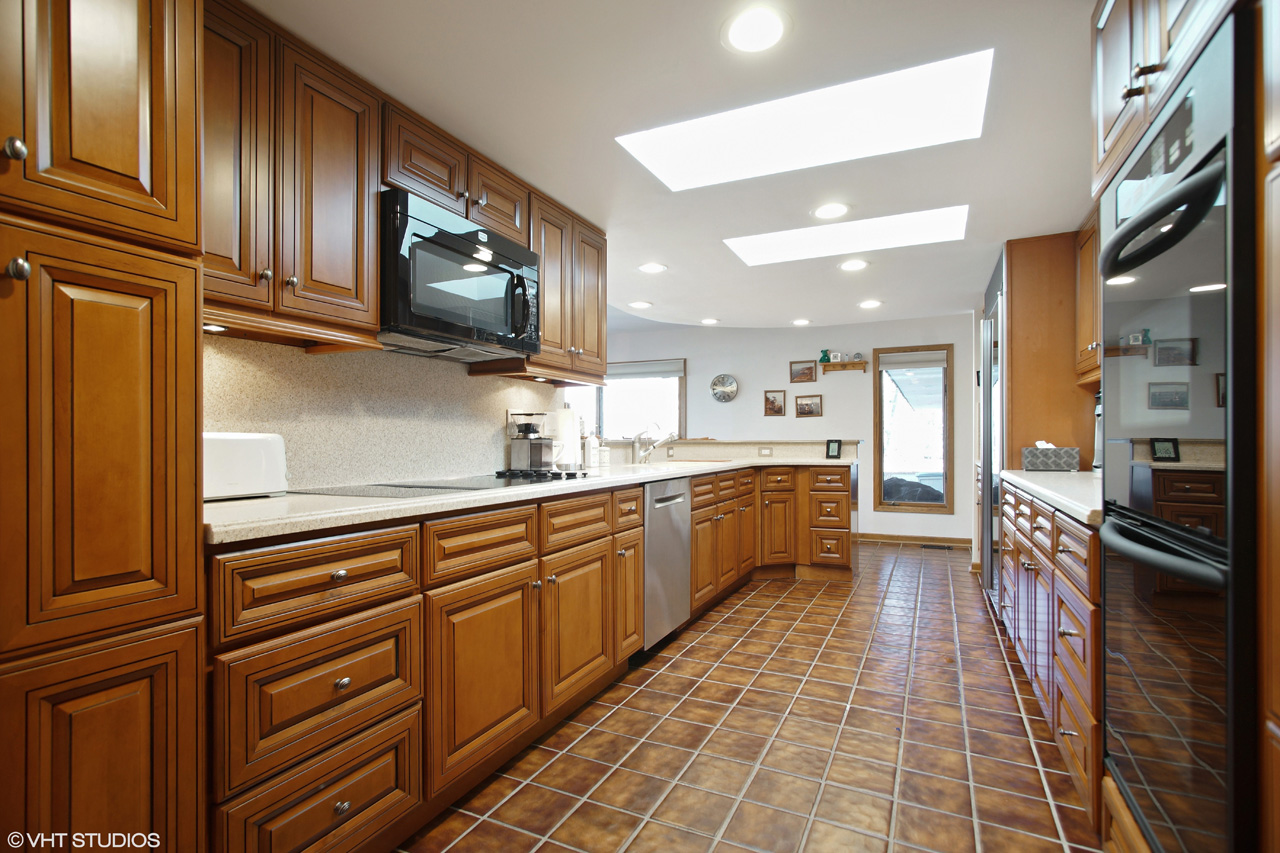 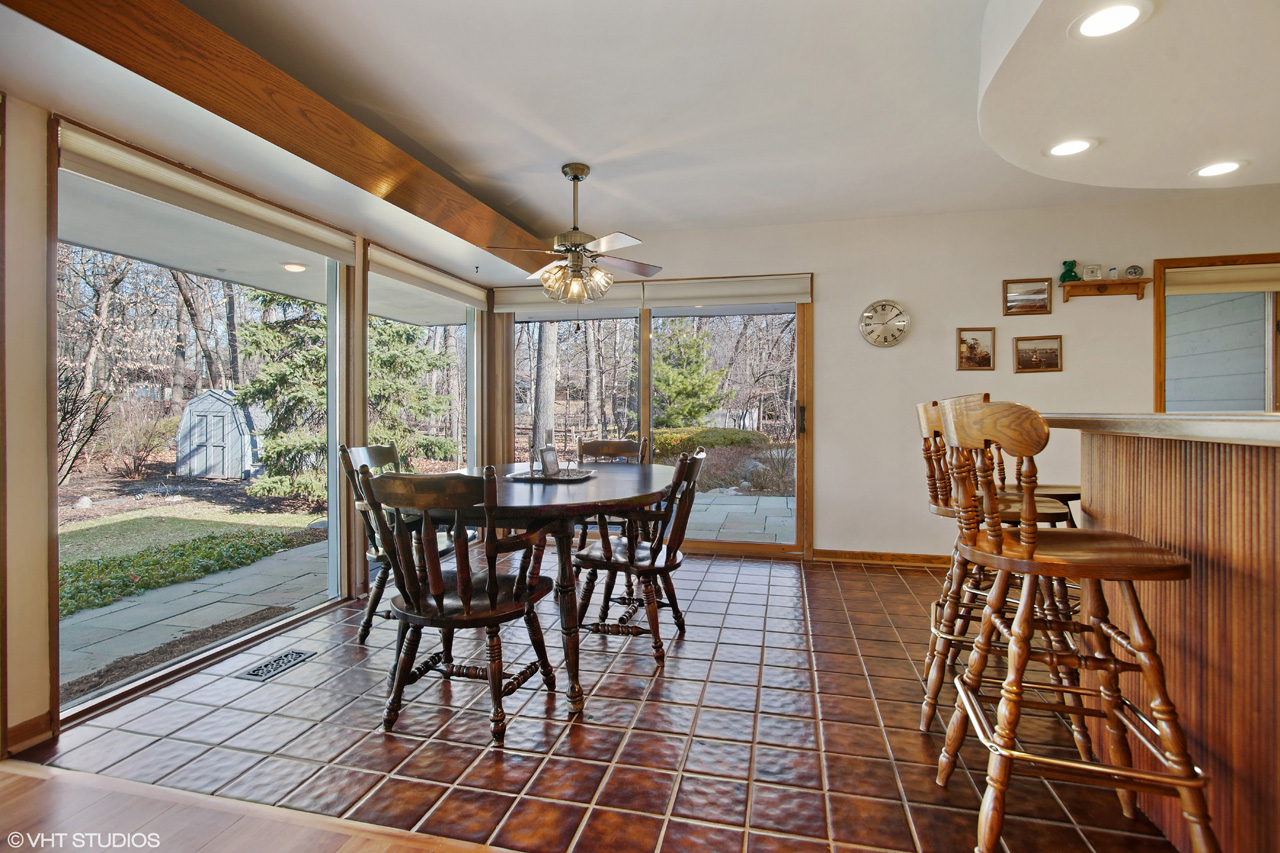 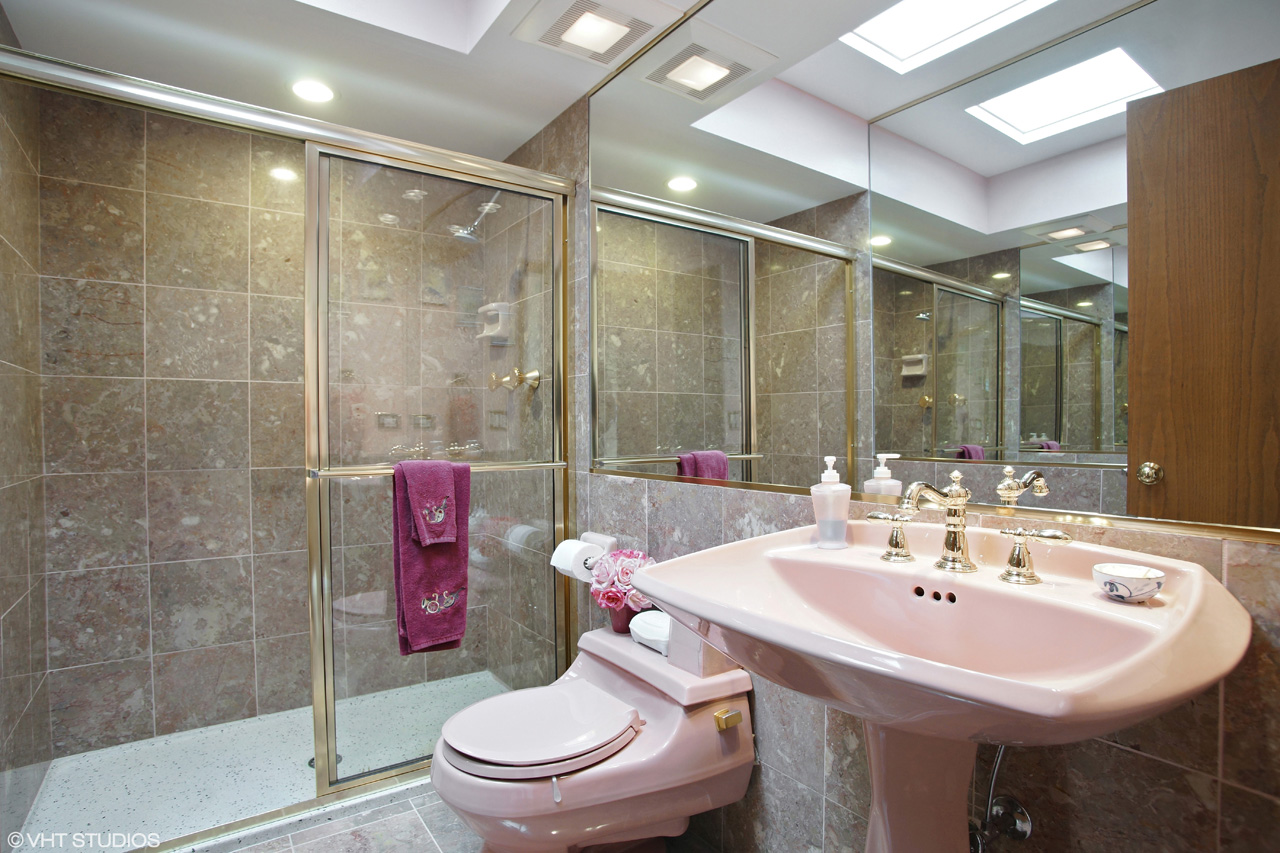 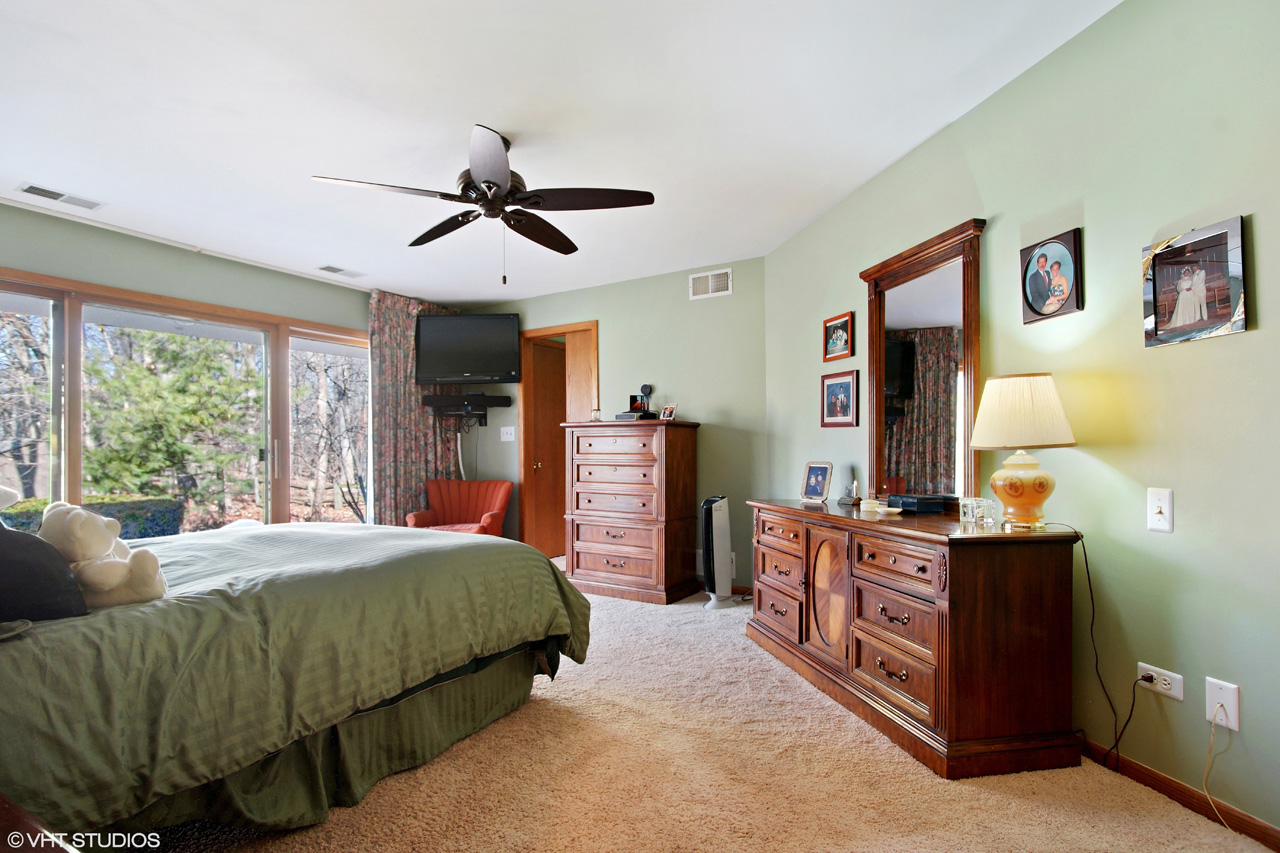 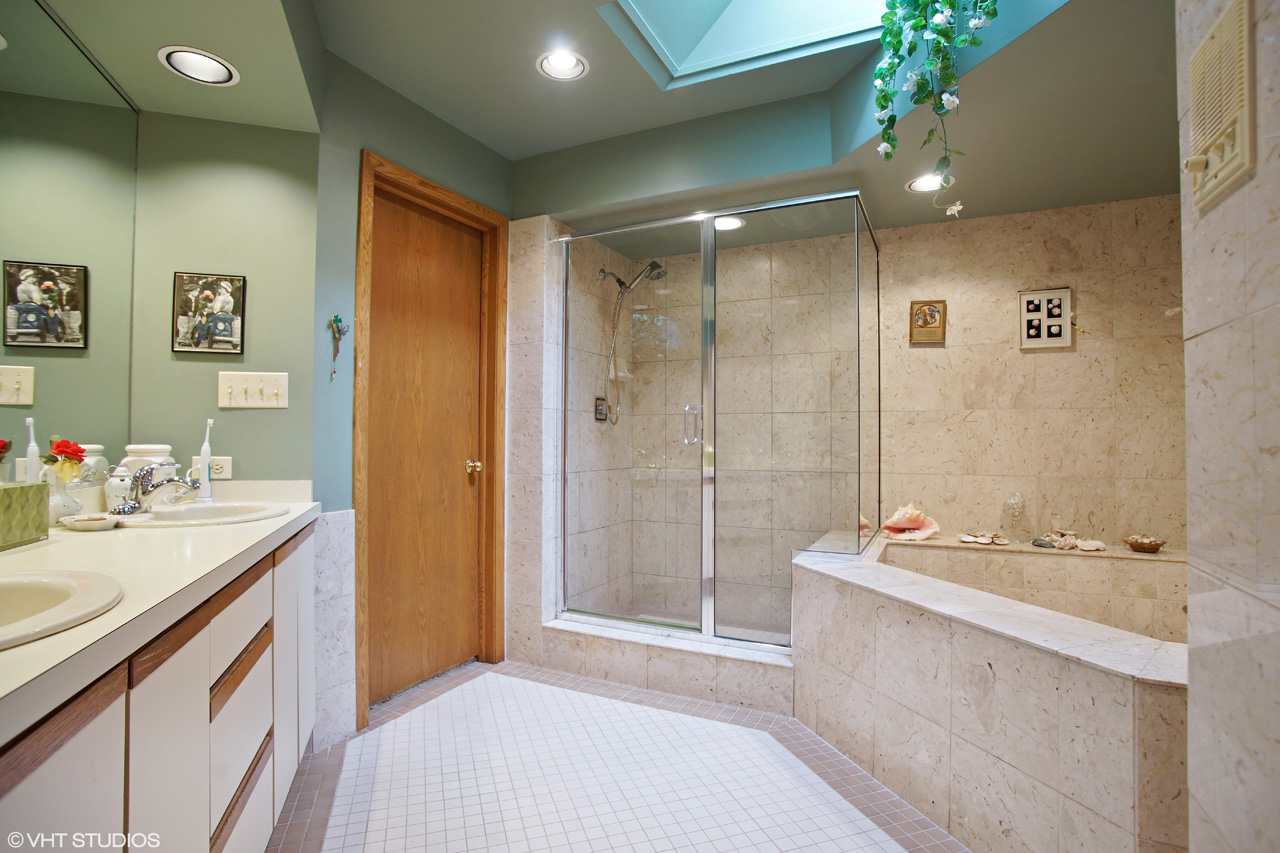 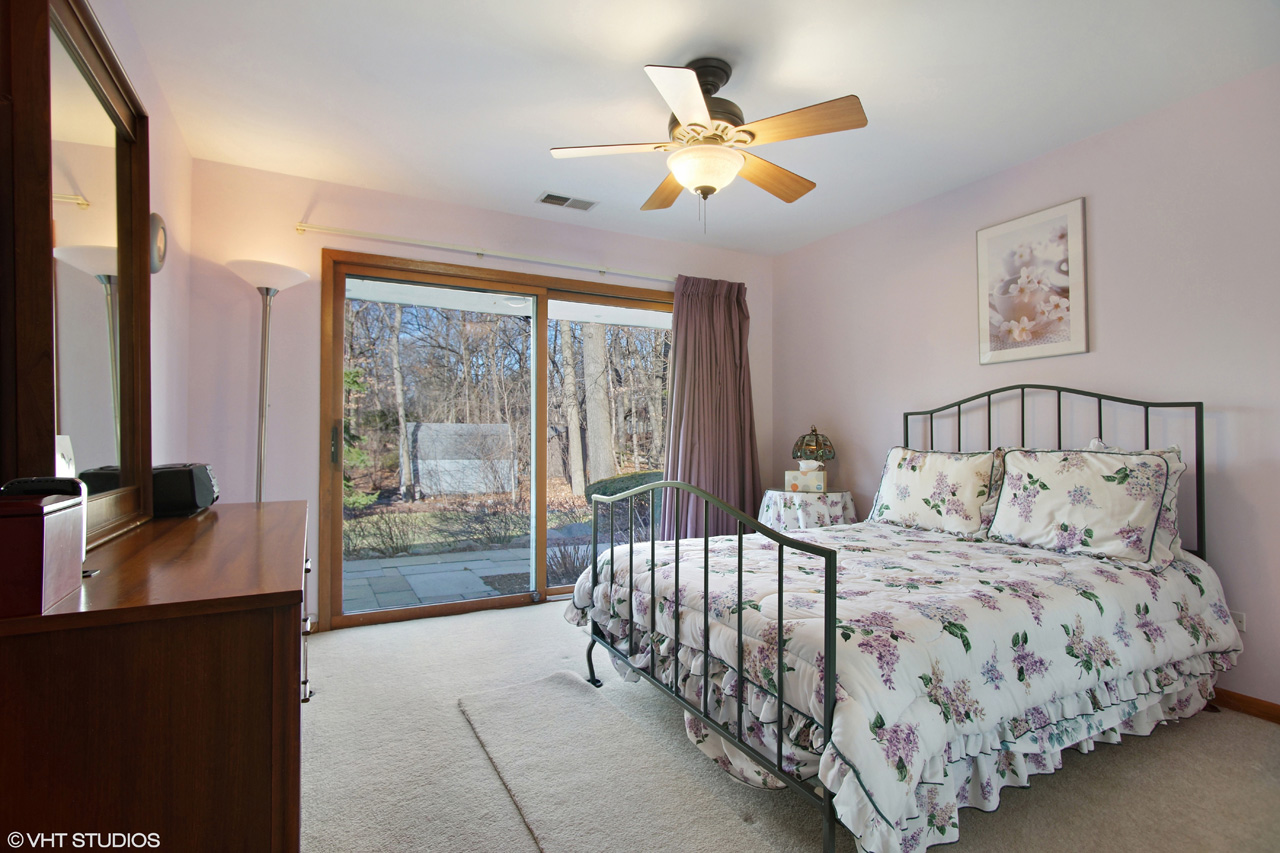 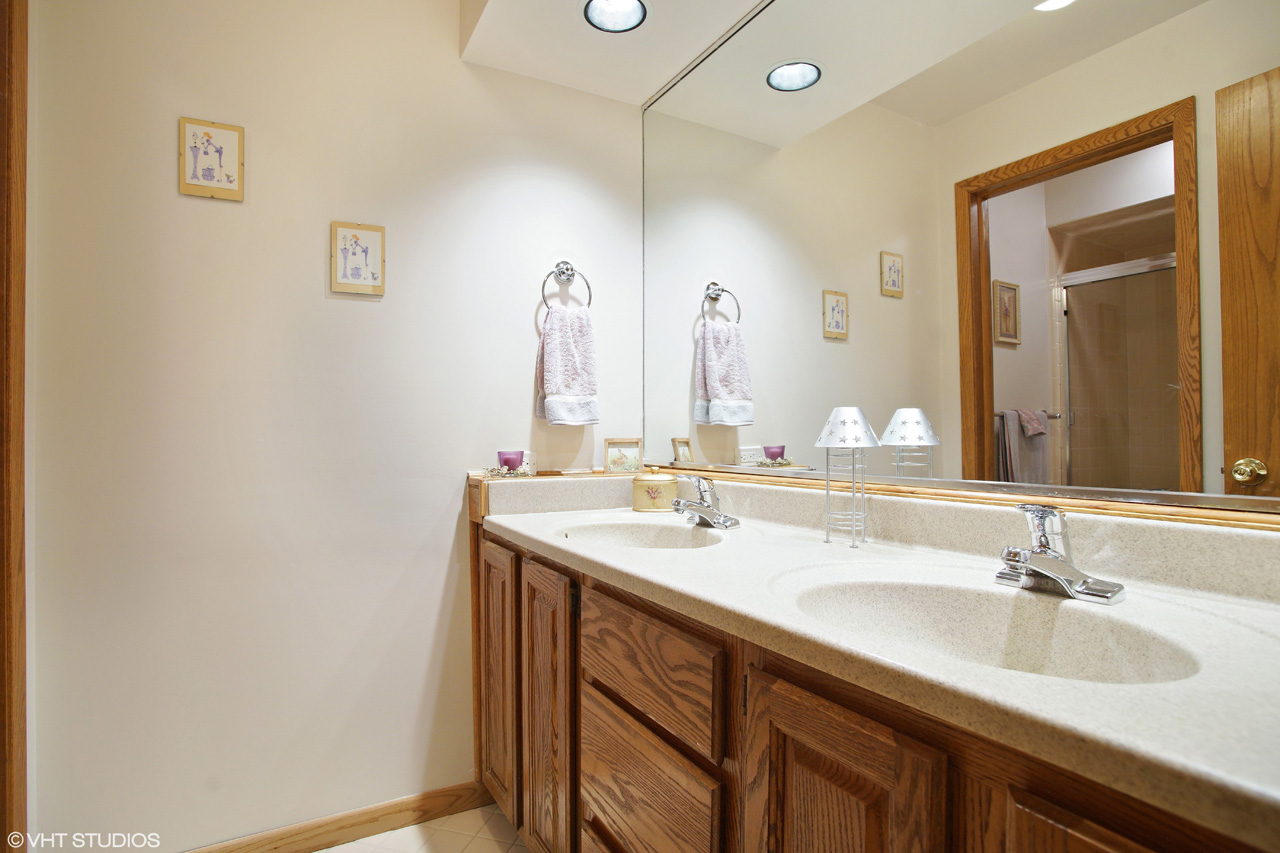 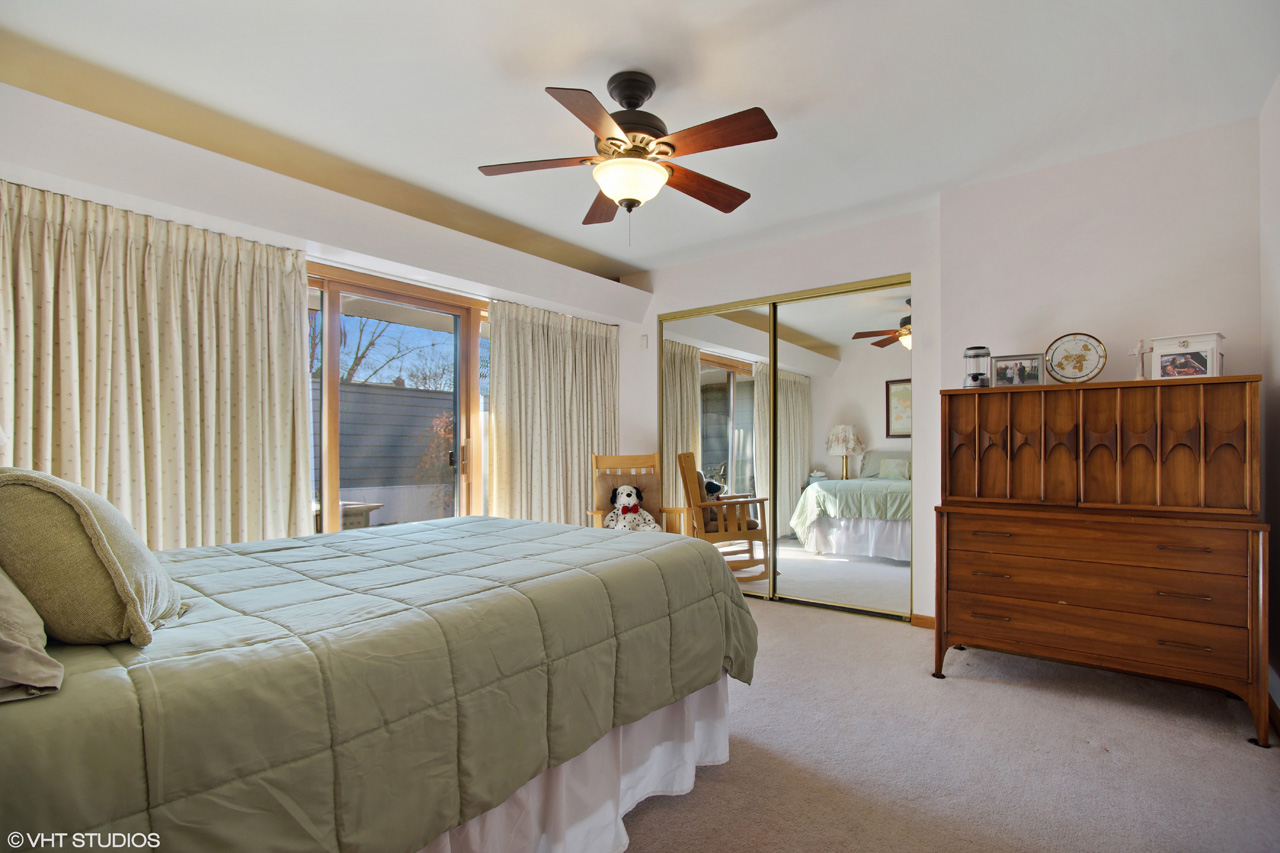 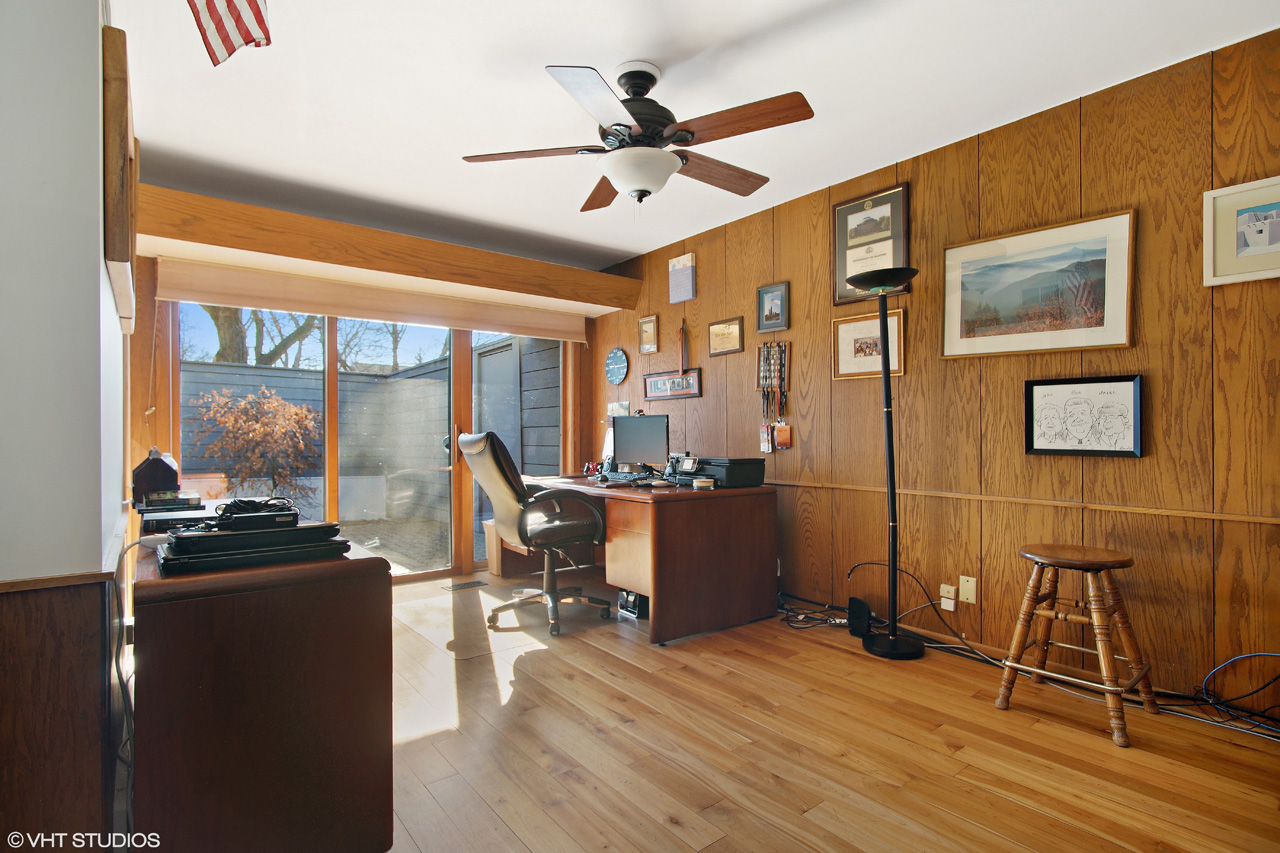 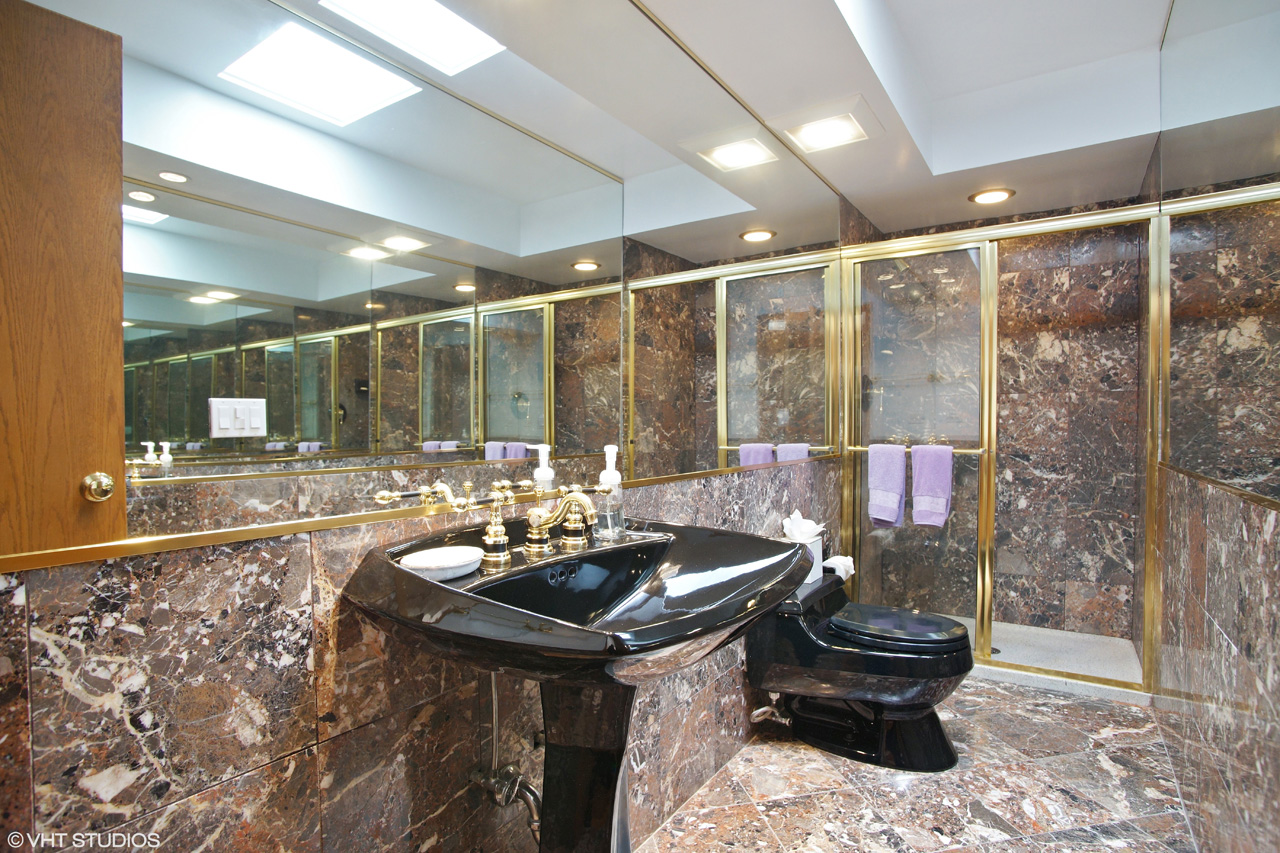 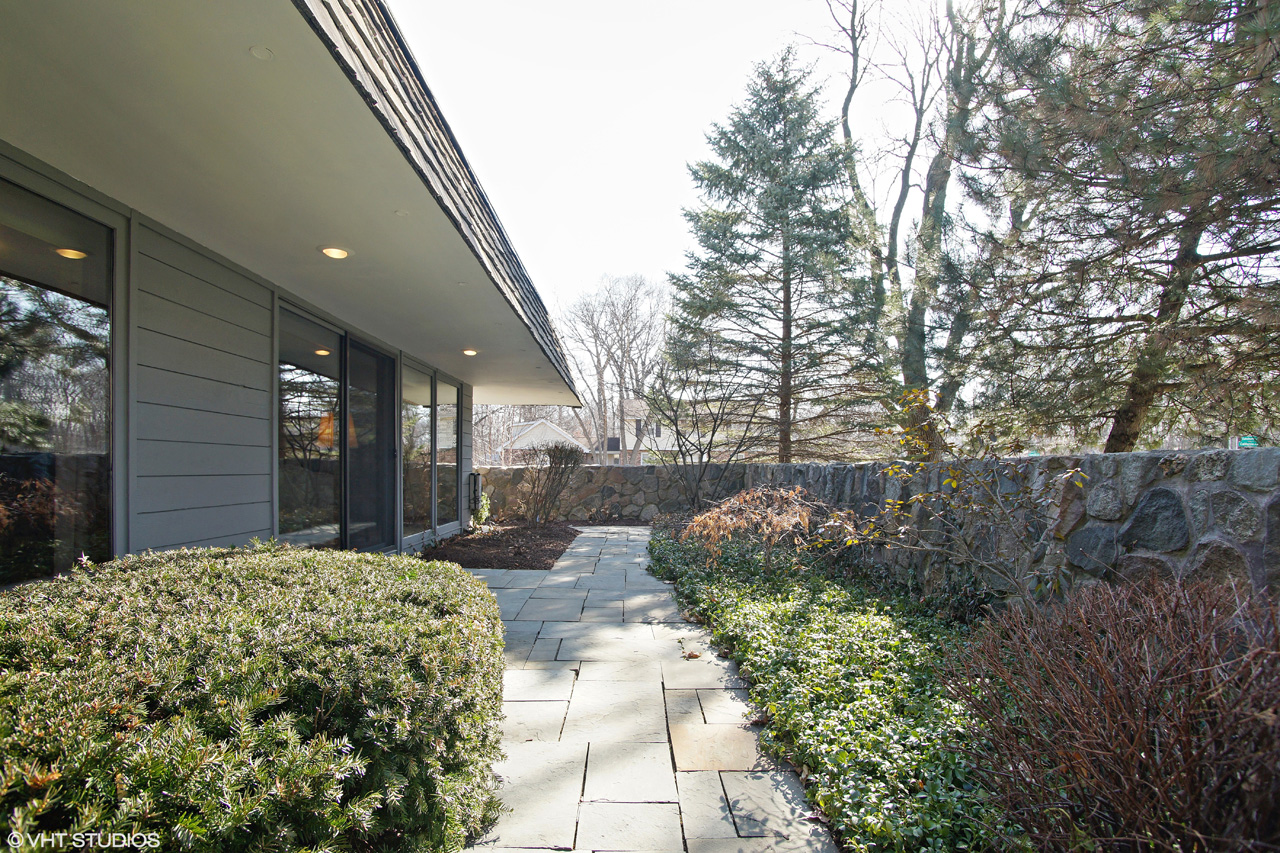 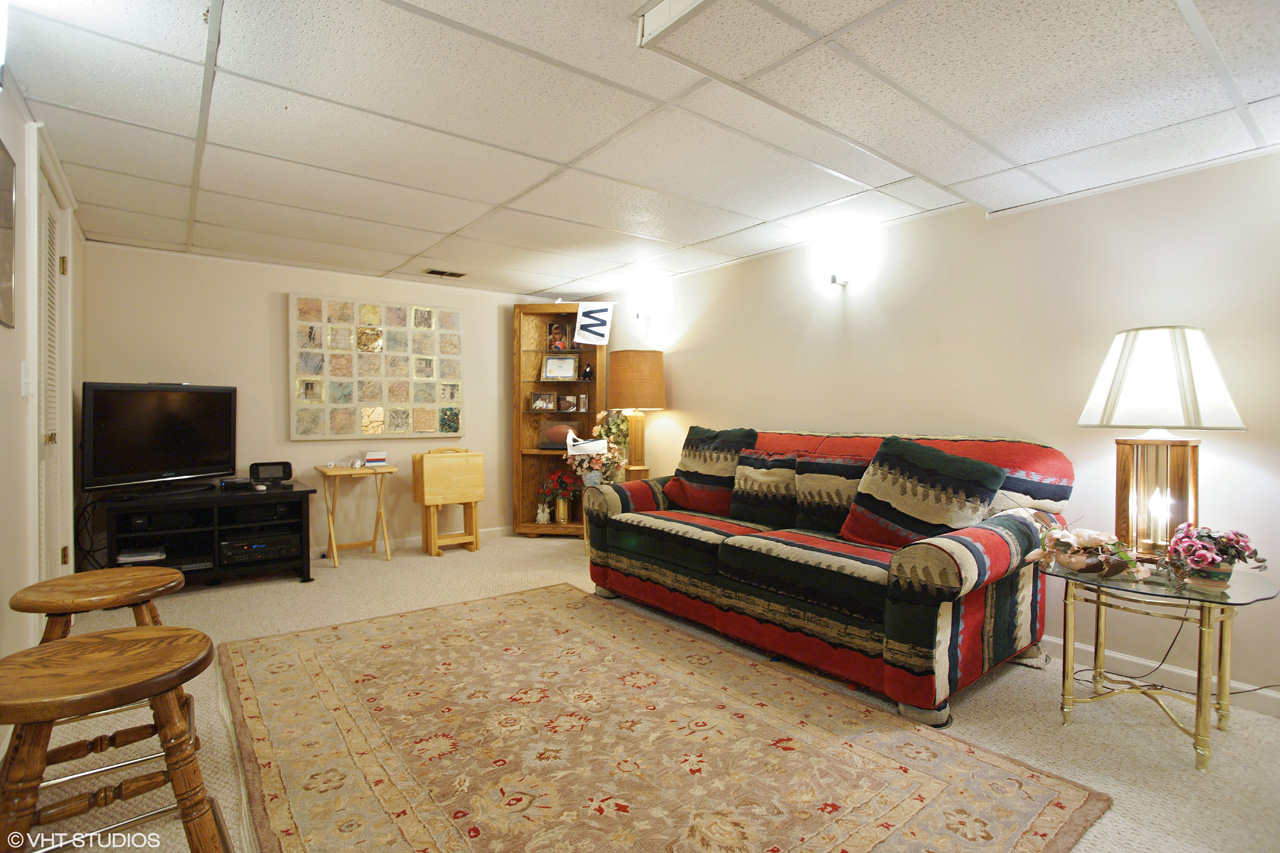 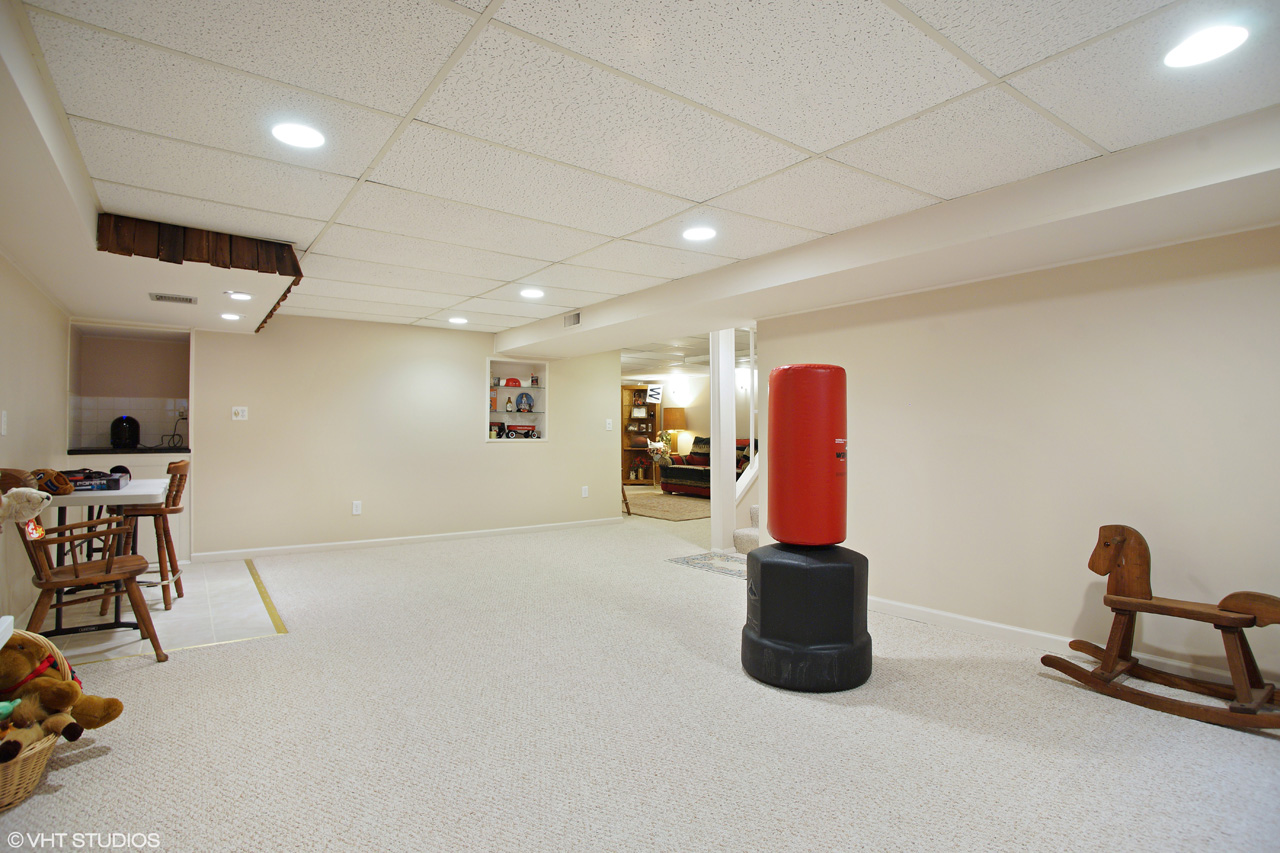 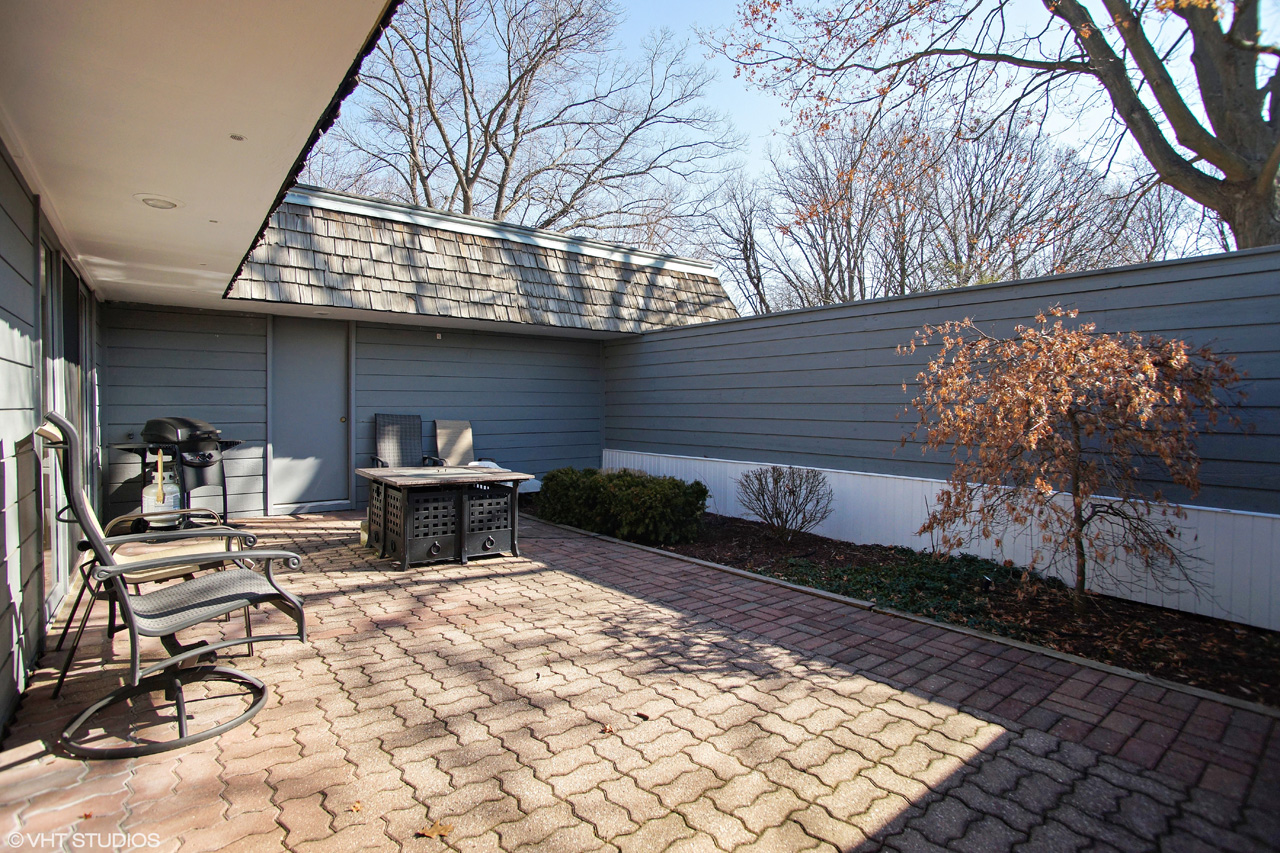 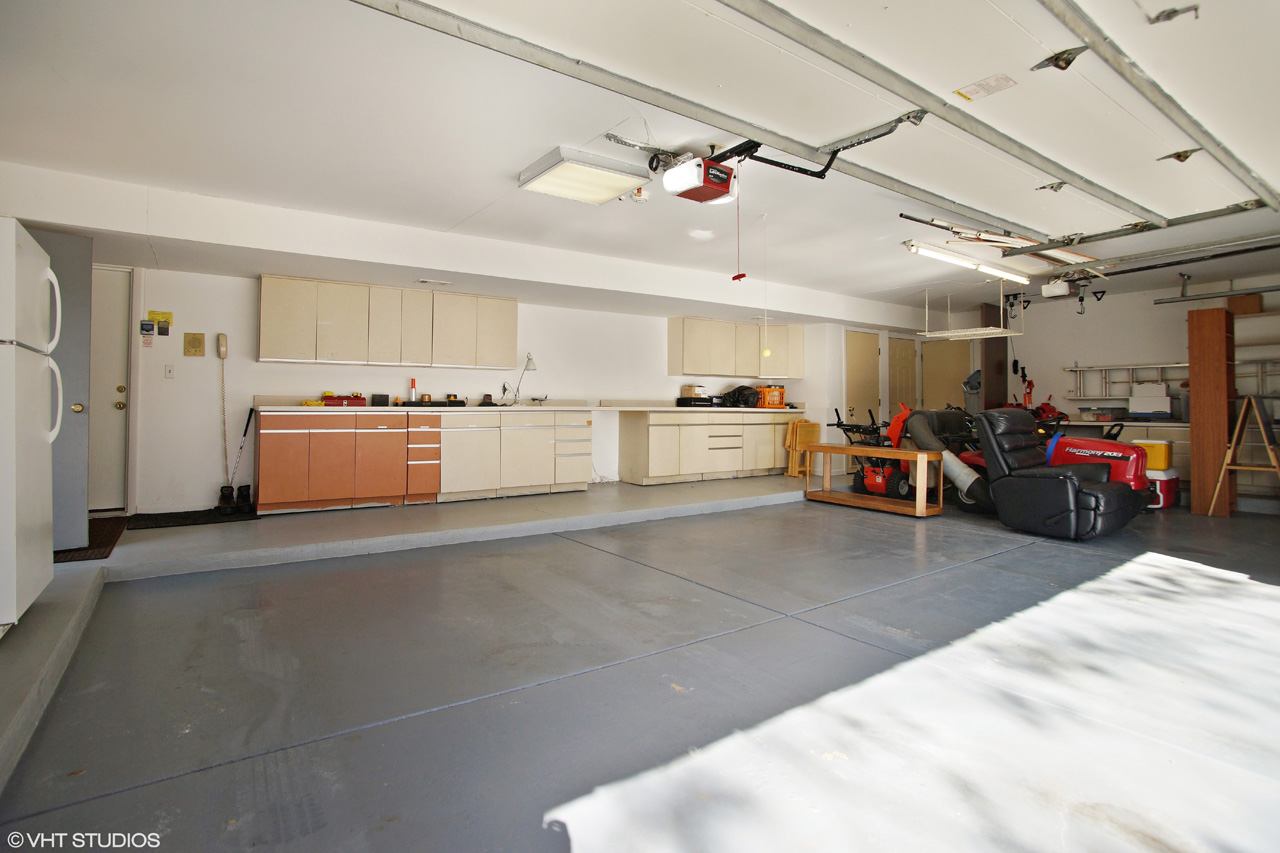 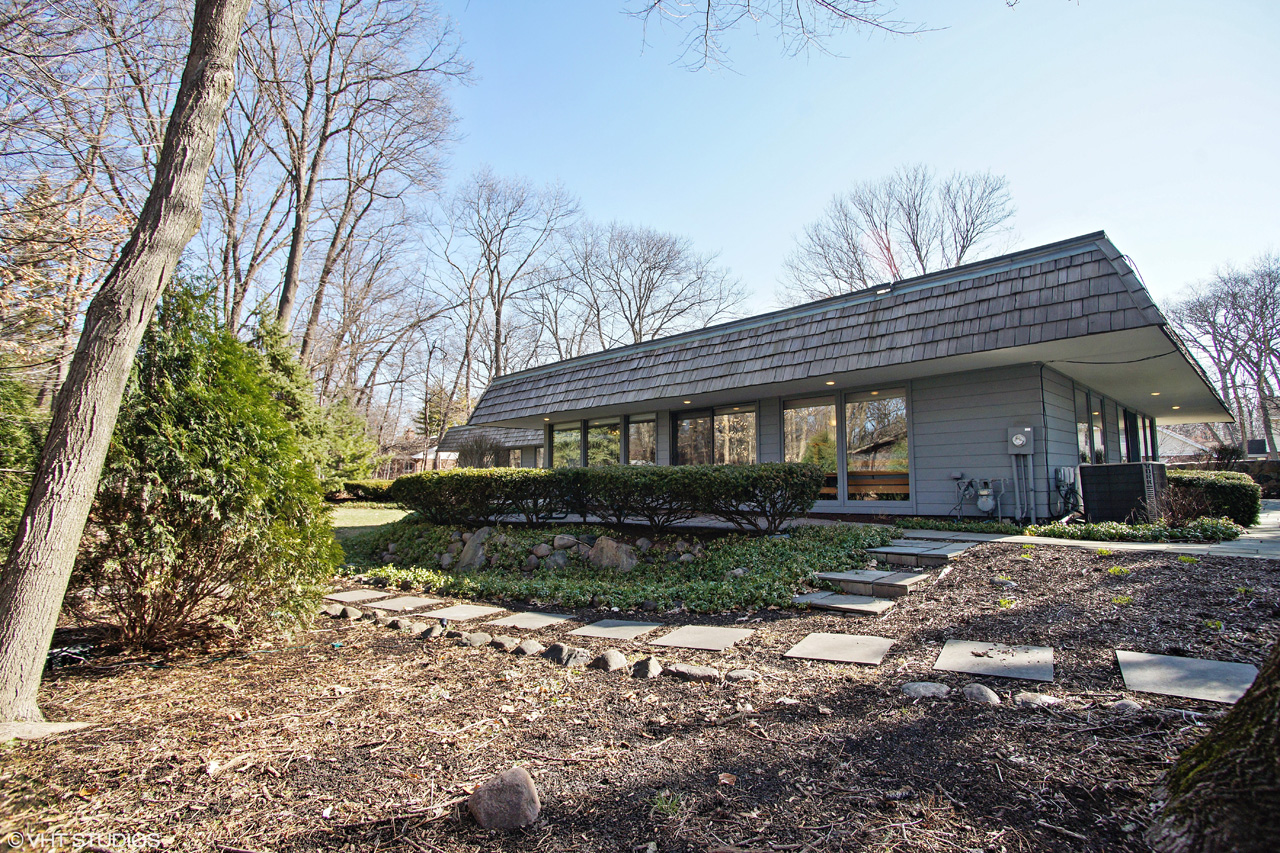 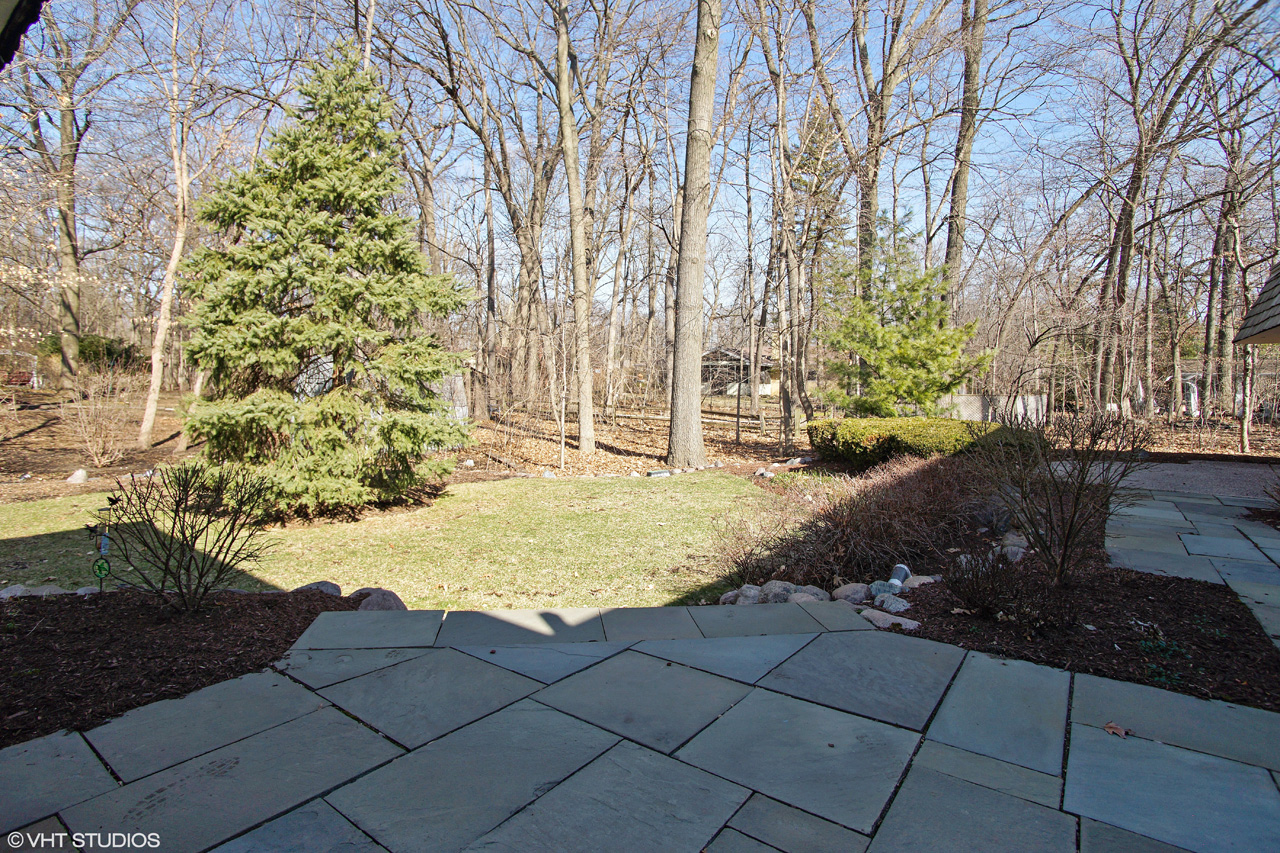 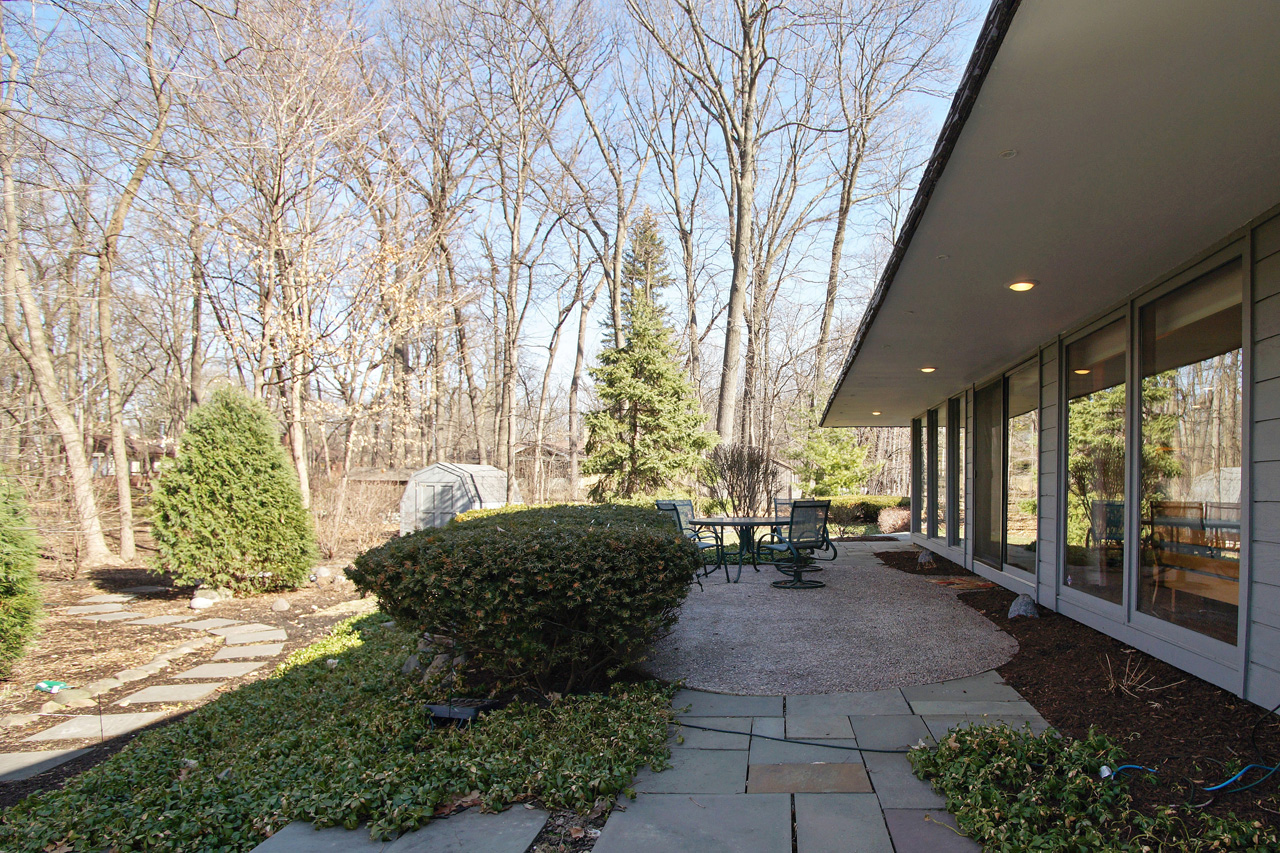 [Show thumbnails]
There are certain words and phrases associated with mid-century modern architecture that always seem to get people excited, but perhaps none more than “walls of glass”. And in the end, it was those walls of glass that attracted Ann and Lee to the house they purchased more than two decades ago at 196 E. Oaksbury Lane in Palatine, in the Forest Estates subdivision.

The plan for the house was originally smaller, envisioned by Architectural Designer Ronald Petralito for his clients, the Swansons.

“Mr. Swanson was an executive in the metals industry,” explains Petralito. “He once made me a mobile from various stampings of steel disks that his company manufactured and were used in making electric motor armatures. My previous houses were in a subdivision of narrow lots that required me to build tall fences if I wanted to use large glass walls to embrace outdoor spaces. With this lot, due to its size and elevation from the street, I had my first opportunity to embrace patio space with a stone wall height that permitted views over it while maintaining personal privacy within the house. The strong horizontal lines of this house are a continuation of the Prairie School of architecture, notably Frank Lloyd Wright, yet I feel the roof sitting on top of the walls that enclose the bedrooms’ patio is more of a Bauhaus element. These two schools of architecture have influenced much of my work.”

Indeed, elements of both schools can be found in the design of the home, which from above resembles two large rectangles connected on opposite sides of a more narrow, central form. Where the original home had a front Master Suite with adjoining office, both of which led to a private front courtyard, and two small bedrooms at the back of the house, a previous owner expanded the home by removing the two small bedrooms and opening those spaces to the kitchen and dining areas. They also added onto the house behind the garage, creating two new bedrooms, including a larger Master Suite with en suite bathroom and a large walk-in, as well as another full bathroom.

As a result of the later expansion, the home now has four bedrooms upstairs in addition to the large, open living and entertaining spaces, and five full baths, including one in the basement, which is mostly finished space.

“We weren’t specifically looking for a modern house, but we did want a convenient house that tended to bring the outside in,” says Lee, the home’s current owner. “We lived nearby, in Plum Grove Estates, which is just south of Forest Estates, and we bought this house to give our kids a woodsy setting close to great schools. They’ve grown now and it’s time for us to let another family enjoy the home.”

I’m always curious to find out what the goals were when designers and architects create homes as commissions rather than spec homes. Some clients are much more hands on, and some only have a general idea of what they want.

“The Swansons had seen several of my houses that were built in Lake Briarwood,” continues Petralito, “and only gave me their basic requirements. We had some phone calls during the preliminary design stage and as I remember, all of them were with Mr. Swanson. I was actually surprised they gave me the latitude to develop the plans that they did. But when I first presented the floor plans and elevations, they had trouble envisioning it, so I created a perspective drawing for them. After reviewing it, they told me to go ahead with the construction drawings. That was many years ago and I still feel a fondness for them and this house.”

For Lee and Ann and their kids, the home was perfect. “The floor to ceiling windows that brought the stone wall and woods inside, making them feel like part of the house, were our favorite aspect right off the bat. We’ve had a lot of professional landscaping done over the years to make the views through all the large windows even better,” says Ann. “The mix of plant species has given us beautiful views any time of year.”

Indeed, the walls of glass do a fantastic job of blurring those indoor / outdoor lines. With almost the entire south and west walls of the home being glass, the views are beautiful from all of the spaces that enjoy those window lines, and the use of gorgeous split granite boulders, both for the privacy walls outside and the fireplace that separates the living and dining areas inside, serves to further that effect.

If you ask Ann and Lee about their favorite part of the house, there’s no hesitation: “The kitchen and family rooms. That’s where all the windows are!”

As for the home’s designer, Mr. Petralito has a slightly more diplomatic answer, but one that essentially ends up in the same place. “It is true that a house is comprised of a set of elements and decisions, and one could dwell on any one of them, but in the end, it’s how they work together in creating an experience of its unique space, both inside and outside that matters.”

If you like the idea of living in a house with walls of large windows that let you enjoy the views of nature outside, 196 E. Oaksbury is on the market for the first time in more than 20 years. Feel free to call me at 312.907.4085 or send an e-mail to me at lou@modernil.com if you’d like to set up a private showing.

UPDATE: This wonderful MCM home went under contract in 5 days and closed in May of 2018.